Goldstein, star of Ricky Gervais' hit comedy drama, Derek, hits the stage in Edinburgh to regale us with his inebriated, psychedelic antics.

He took us on a journey along his own drug-taking timeline telling us his memoirs of before, during, and after taking various drugs of various dangers.

It culminates in the story of his journey to the Burning Man festival as mentioned in the title. Comedy derived from the feeling and aftermath of taking drugs is not a surefire way to be funny but Goldstein's delivery helped propel it. Despite coming out and expressing his decided lack of confidence in himself through a series of anecdotes to its avail, he got through his routine with great professionalism. However professional stand up comedians get anyway.

Because his experiences are those which many people would only be able to imagine, talking about the emotional impact of his life when these things were happening is impactful. He doesn't take the deft approach of pretending he was an addict, it seemed he used with some control his ability to draw on his experiences conscientiously from going from an outsider himself to in the throes of it all makes for riveting listening and a good gateway for the audience to peer into what he'd been up to.

But it wasn't all feelings and things. He segued from the primary extended anecdote into bits about his disdain for Dapper Laughs and some stuff about people he'd slept with. The ability to be childish as well as thoughtful is a commendable quality of the routine and Goldstein.

It was all a bit slow, though. Like I say it was nice to see a show which was thoughtful as well as childish – precisely what brought out Elephant's appeal to me but I think Sarah Callaghan had the more effective formula with regards to quantity and execution of the two aspects against/with each other. His humble charisma wasn't enough to make up for a slow-burning anecdote which was too far removed from the immaturity of the drugs jokes for the audience to sustain consideration for it. We became a bit disinterested and the offhand jokes routed in quotidian ridicule didn't do enough to pick it up. It seemed too much of a mismatch between storytelling and comedy.

Catch Brett Goldstein: Burning Man in the Pleasance Beneath in the Pleasance Courtyard at 21:30 for the rest of the month except 17 August - https://tickets.edfringe.com/whats-on/brett-goldstein-burning-man 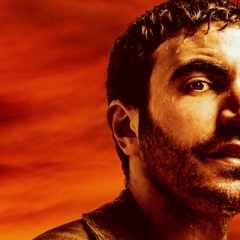 Goldstein, star of Ricky Gervais' hit comedy drama, Derek, hits the stage in Edinburgh to regale us with his inebriated, psychedelic antics.