I feel I have reached a point in my life where I need to start questioning everything I thought I loved, to make sure I wasn't just clinging onto them for the sake of nostalgia. Lili La Scala was one of the things on that list. I have had the insane privilege of reviewing AFVS for the last 3 years -partly because I've been too selfish to allocate it to another reviewer - and every year I have awarded it five stars, only because our rating system doesn't go higher.

I've found recently that my tastes have changed, and when coupled with the awful day I was having yesterday, I genuinely didn't have high hopes for the show. I thought that the jokes would feel old, the acts would be samey, and I would be too tired to appreciate it.

I want to go on record and say, 'Lili, I'm sorry I doubted you.'

Other than what might have been the most awkward moment of Edinburgh to date, where I had to stand and shout out 'Lili, who's your daddy!' (it certainly isn't me, the socially inept journalist), I can honestly say I am still as in love with the show as I was 3 years before.

Lili still looked divine in her many dresses. Her voice was still beautiful, powerful and did justice to every song she performed. The 'banter' between her and her pianist was funny and organic, and her interaction with the audience (when not picking on me) was great.

Although the acts could be different when you go to see her (because you will go and see her), she has never had a terrible act to date, and that hadn't changed either. Each were funny, clever, and if I wasn't incredibly busy I would try to catch all of their solo shows.

I thought I was falling out of love with the Fringe, but Another F***ing Variety Show was the marriage counselling we needed. I went in feeling fatigued, fed up and desperate to get home. By the end I genuinely felt more alive than I had all week. I could have quite happily sat there for another 3 hours just listening to Lili sing, chat, and let her friends perform for a collection of strangers who were, for a brief hour and a half, united in the pleasure that this one of the best things you can see at the Fringe. Maybe next year I'll let one of the other reviewers go see her show. Maybe. Possibly. Probably not.

Lili still is, to me, the embodiment of the fringe, and to not see her is to miss the point of it entirely.

Lili la Scala is performing at the Pleasance Dome until the 29th August (not 17th or 24th). Tickets are available at the Fringe Website. 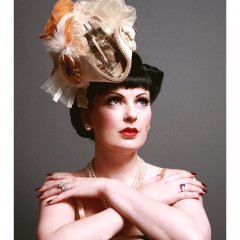