Middle of the road comedy with smatterings of genius

Hal Cruttenden is a comic with an illustrious career. He has been on Mock the Week, Live at the Apollo, and Have I Got News For You, among other shows. He has also been on radio, with his comedy show 'Hal'.

Cuttenden talks about growing old, how dreams match up with reality (or rather, fail to), and the simmering anger that boils away beneath the surface. He had very good interaction with the audience, discussing in depth a now disbanded printing union with a gentleman in the front row.

His show was very slow burning. Many of the starting jokes got polite laughter at best, and the first round of applause came from the response an audience member gave to his probing. As the show went on he began to get more into his stride, and that was leading us towards a much darker, low brow form of comedy, which was much more my style.

We had some terrorist jokes, some sex jokes, and a few paedophile jokes which were satirically relevant with the ongoing police investigation into MP's. These got bigger laughs than what could be considered his more clean material. Does that make the audience bad people? I don't think so.

While I was laughing frequently throughout the set, there was nothing that really set the world on fire. His content, while an accurate reflection of many of my life views, was not really presented in a comedic fashion. Some comedians are able to rely on campness alone to make a show, Hal isn't one of them. This being said, the jokes that were punchy really were great. He also gets bonus marks for being a Smiths fan.

Mostly innocuous comedy, but failed to evolve into anything spectacular.

Hal Cruttenden: Straight out of Cruttenden is performing until 30th August (not 17th) at Pleasance Courtyard. For tickets and more information, visit the fringe website. 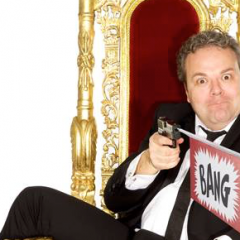 Middle of the road comedy with smatterings of genius