London's freshest comedian with a chilled sense of humour.

Funmbi Omotayo, a London based comedian, with a very chilled sense of humour.

Raised in London in a Nigerian household, Funmbi shares his experience growing up in hackney, and expresses the humour in each situation. He entertains us with his childhood experiences in Nigeria with good strong gags and funny punchlines.

Overall it was a strong performance, but I would say most of his material revolved around his culture and background, which is was relatable for particularly myself and some African members of the audience. To be honest this show had the most diverse audience I've seen all day. The show was evenly paced and had a fair amount of good content.

There were some good funny moments like his story in Nigeria, but I feel his material lacked diversity. He plays on the race card quite well but it felt like he kept referring back to it for most of his jokes. It got the laughs but around the end it became a little predictable. I think a few members of the audience were mildly uncomfortable with some of the race jokes and references. I sometimes felt I had to look over to see who was left laughing.

I enjoyed myself as much as I could. Funmbi is a good comedian, although it did feel slightly scripted, I can say his performance was pretty funny. I would definitely recommend see him if you enjoy good good comedy and don't take things too seriously. 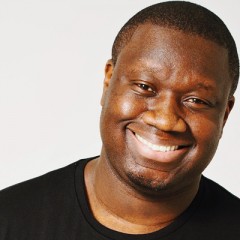 London's freshest comedian with a chilled sense of humour.