A review on a local school play - Anything Goes. It follows the main character's journey to pursue their love.

I went to a musical called Anything goes which was performed at Magdalen College School by the students who go there. It was a great musical that follows the main character Billy Crocker to pursue his love Hope Harcourt. There were lots of cool props to set the scene of being on a boat and the lighting was controlled throughout the whole play. I particularly enjoyed watching the sections that had all the actors singing on stage at the same time as it creates a strong sense of unity together especially the harmonising of voices like the theme song ‘anything goes’. I also thought that it was quite amazing to have a live band playing for all the musical components since they timed it well with the lines. Overall, the actors gave off a very positive impression as they looked very energetic with the dancing, making the audience feel more drawn to them. 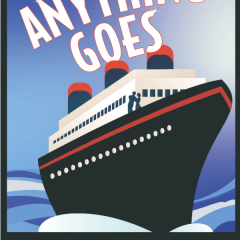 A review on a local school play - Anything Goes. It follows the main character's journey to pursue their love.