Raya and the Last Dragon is Disney’s first cinematic foray into SouthEast Asia in the company’s 90 year history. What does this mean for the region?

Raya and the Last Dragon follows its eponymous heroine and her anthropomorphic sidekick Tuktuk as she travels around the imagined kingdom of Kumandra to save the world. Rather than taking inspiration from one specific Southeast Asian country, the animation is instead an amalgamation of different regional elements. Raya wears a hat similar to a Filipino Sakalot, her sidekick’s name of Tuktuk is the name of a Thai rickshaw used as public transport, and her fighting technique is taken from the traditional martial art of Silat, which is practiced in many South East Asian countries.

Given this cultural fusion, some viewers have expressed that the film feels superficial and selective in its representation of SouthEast Asia. As the region is home to 11 countries, 673 million people and hundreds of cultures and ethnic groups, some audiences have questioned whether it would’ve been more valuable to narrow the scope of Raya and the Last Dragon.

In response, the film’s co-scriptwriter Qui Nguyen said ‘this is our opportunity to create a wholly original story, but have its DNA be from somewhere that's real. We don't want to tell a story where the bad guys are from Thailand and the good guys are from Malaysia. So this felt like the way to do it’.

Representation is particularly important within Disney films due to their popularity (its streaming platform Disney+ has almost 95 million subscribers) and its young demographic. Perhaps in trying to depict such a large region and the many cultures within it, Raya and the Last Dragon ends up not servicing anyone in particular. However, this is a step towards a future where films set outside of the West won’t have to carry the burden of portraying multitudes of regions and cultures all in one. Instead, they will be given more than one filmic opportunity to represent specific regions in the ample detail they deserve.

You can watch Raya and the Last Dragon on Disney+. 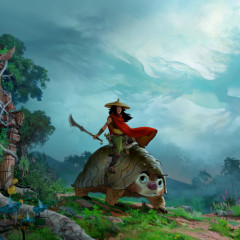 Raya and the Last Dragon is Disney’s first cinematic foray into SouthEast Asia in the company’s 90 year history. What does this mean for the region?