You may remember previously reading an article I wrote about the benefits of using a 'read it later' service, namely Pocket. It has been a firm favourite of mine for many years, serving as a dumping ground for exciting long-form articles I just don't have time to read, or perhaps want to save or a journey where I won't have a data connection.

The service has grown significantly since their launch in 2007, and last week they released a new beta service for those of you who want to be on the bleeding edge.

Founder and CEO of Pocket, Nate Weiner, wrote last month that they "want to create a platform that enables people to save and consume the content they care about most. And by doing so, we hope to make it easier to spend time with more high-quality content, no matter how noisy it gets", and they have started making that a reality by introducing a new recommendation feature

The move is in attempt to sift through the noise of the internet, which is fuelled by page views and the constant necessity of new content. Pocket wants to remove the "expiration date" of good content, by curating the millions of articles saved to Pocket each day, and then delivering it to you based on articles you already save.

"Getting these features right is enormously important to us, and in order for us to help connect you with the best content on the web, it means that we need your input to know what's working and what's not."

Weiner says that this is just the start for Pockets expansion, and that there are many more features coming over the next several months. To be the first to experience these features, you'll need to join the beta programme.

To get your hands on the beta versions, click on the relevent link below one of the links 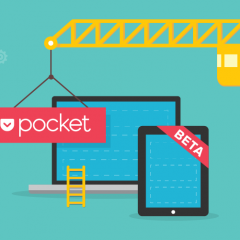