Bec Hill takes some time to talk to Voice about the show, inspirations, and to give advice to young people.

Hi! My name is Bec Hill. Or Be Chill if you read it wrong.

An hour of pure silliness - an antidote to the anxiety and fear we're currently bombarded with on a daily basis.

Because when I perform in my living room, it is hard to fit everyone in.

It is quicker to get to from London than the Adelaide Fringe.

Yes, because in 2009 I started performing at it and according to scientific research, there has been a rise in the quality and quantity of LOLs at Fringe since then. There is definitely proof and sources for that research, but you don't know them. They go to another school.

It seemed like a good alter-ego after I killed that guy and went on the run- I have said too much.

I'd be the world's first astronaut detective: Bec Hill - Space Investigator. Or on the dole.

I drew a picture of me sneezing when I was 5 and glued an actual tissue on to it, because I'm a pioneer like that. This was last week.

On Twitter, yes. But in my stand-up, I much more enjoy stupid puns and showing drawings I've done.

Not me personally, but when horrible things happen close to home, you do notice a drop-in people attending comedy clubs. I think to many, comedy is a luxury and it feels a bit wrong to treat yourself to it when others are suffering.

It's two thousand and seventeen

Jesus. After all the initial questions, I think He'd be a great director. He'd know which bits are solid and socially responsible and which bits I should cut. Also, it'd be great publicity.

I've always done ticketed shows, largely because the Gilded Balloon is my favourite venue and the staff there play a large role in me returning to the festival. Plus, you know you'll have access to proper tech, comfortable chairs for your audience, a press office, etc. It means you can put on a higher quality of show – in my opinion. But if your show doesn't rely on creature-comforts, then the free fringe certainly makes financial sense, especially if you are new, or trying something out.

Go along as a punter first. Try to see as many shows in as many different rooms as possible. Mingle. You'll get an idea of what audiences like – both performance and space wise – and you'll make important contacts who can help you when you DO take a show up.

Bec Hill: Out of Order is performing at The Gilded Balloon at 17:15 on 2nd – 27th (not 15th). For tickets and more information visit the Ed Fringe website. 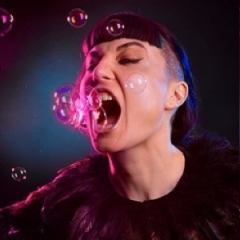 Bec Hill takes some time to talk to Voice about the show, inspirations, and to give advice to young people.