From classical singing to the newsrooms, Sandra Coffey has had a varied career in the arts. I spoke to her about her experiences –including coverage of the Eurovision Song Contest!

It is always intriguing how creativity forms within someone. Whether it is an artist or a writer, it is fascinating to see if their interests in their early years mirror what they do now. For Sandra Coffey it was the sound of Maria Callas on the radio and her love of writing that ensured she pursued a creative career, ending up as a journalist. Recently, she has converted her career in journalism into a book that can help guide others in the profession. On top of this she has had her short story nominated for Irish Short Story of the Year – something her younger self would have dreamt of.

I spoke to her about her early interests, and the career that followed, often facing difficulties along the way.

You started off as a classical singer? What initially ignited this interest?

Music was always on in our house growing up, and it was a topic of conversation over breakfast – especially on Saturday mornings. Whether it was a radio show on or a CD new release, it was always there. I heard Maria Callas sing one morning on the radio and I was blown away. At the time I didn’t know who she was until the DJ said her name at the end. There wasn’t any Google then and I had to ask around to find out more about who she was. Next time I was in a CD shop, I bought a CD of her best classical arias. After that, I was hooked.

My parents got me piano lessons from a very young age as well. I played classical music and took exams.

What barriers did you encounter as a classical singer?

Sadly, when I began there weren’t many opportunities for classical singers in the west of Ireland. I got great training from teachers in my area but I had to travel three to four hours to Dublin regularly for masterclasses and to competitions. I also travelled to London. It got extremely tiring and expensive. There were also no online classes or opportunities to attend singing conferences virtually.

At the time, I was also starting out in my career as a journalist, and it was tough to keep both going. Now that things are more accessible, I plan to reignite my classical singing side by doing an album in the near future.

So, journalism was your career focus! What got you interested in it?

I loved creating stories, even from a very young age. I used to write articles when I was a kid, and I’d imagine them being placed in magazines and newspapers! When my career started, I embraced it fully. I loved meeting people and hearing their stories. And also, covering stories that affect people’s lives.

What are the most interesting stories you covered or people you met?

It’s difficult to pick out a few from my 15 years in newsrooms! I’ve covered some heartbreaking stories over the years. To keep it light hearted, I went to cover the Eurovision Song Contest some years ago and it was an absolute blast! The atmosphere, seeing the massive staging, being backstage, the camaraderie between the countries and interviewing so many different people - it was a great experience.

You have recently returned to music. What style do you adopt now?

If I was to describe it, it would be a mix of Joni Mitchell, Joan Baez, Stevie Nicks and Adele. I released an album in 2015 titled “Morning Zoo” which was a mix of alternative pop. In the future I’d love to do another album of original songs. My big ambition is to release an album of my favourite classical songs. That would require some training first to get my voice back into shape for classical singing. There’s no better feeling for a classical singer than to reach those high notes. That feeling never tires!

How did you convert your writing dreams into published stories or nonfiction guides?

My first book “Breaking Into The Media - A Journalist’s Guide to Getting Publicity” is based around what I noticed from being in newsrooms for well over a decade. I saw people try to navigate the difficult work of getting publicity and thought I could help them. I enjoyed writing the book and knowing that it is helping businesses get the word out about the work they do. The book is a journalist’s insider view of how best to get publicity for your business, event, charity or human interest story. There’s a lot of practical advice in there.

For fiction, I’ve learnt a lot from reading Roddy Doyle and Margaret Atwood. I’ve taken classes online and in-person. I love listening to other writers talk about their methods. One of my short stories, “Bookmark” was nominated for the Irish Short Story of the Year and while this has given me a great boost, my love of writing has always been there, regardless of whether the story gets published or not or wins an award or not.

Any advice to people just getting started in the creative industry?

I think you need to give yourself time to grow and find your strengths. This is so important. Also, be patient! You may not write your best work until many years after starting and I think being okay with that is important. Enjoy it and don’t let your critical eye stem the flow of your creativity!

How important is it that women like you establish support networks throughout the creative industry for other women?

There was a lack of this when I started out in my singing career, and I could have really done with it. I’m a part of a couple of online groups now and their members are so supportive and we care about each other. Being creative can have its great days and then there are days when nothing seems to flow. Having people around you that understand that is vital. I’m also extremely lucky that my partner Trevor Conway is also creative and is a writer. He is also my first reader and I’m so grateful to have his advice.

Her creativity has certainly taken Sandra to different places, from the Eurovision Song Contest to recording her own album. It can be easy to give up on the arts when things are not going well, but Sandra shows that enjoying what you are doing can be enough. Her love of writing remains, with or without the success she has earnt, something that resonates within myself as well. It is important to remember that love, especially in the world of the arts that can often feel quite brutal. 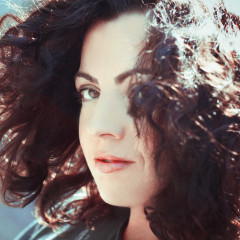 From classical singing to the newsrooms, Sandra Coffey has had a varied career in the arts. I spoke to her about her experiences –including coverage of the Eurovision Song Contest!