After 8 monarchs following the reign of King Charles II, Queen Victoria, 5th Queen of England in her own right (or 4 if you discount the ‘9 day reign’ of Lady Jane Grey), and first monarch to have her photograph taken, decided to make some changes to the society that had been handed down to her. Queen Victoria was made famous for her refinement of British society, and in turn, the British Empire, covering one quarter of the Earth’s surface at its peak during her reign. The Victorian society embodied robust family values; Victoria even included the wedding vow to ‘honour and obey’ her husband, Prince Albert, showing her devotion to her beliefs regarding a lady’s purpose, whether she wore a crown or not. In short, Queen Victoria transformed the entire landscape of British society and behaviour.

An age of invention

The above gives the impression that the Victorian era was a bleak and restricting place for anyone who wasn’t a rich white man. Though that is undoubtedly true, the 19th Century propelled scientific discovery, photography, the telephone, the railway and other numerous revolutionary inventions. The most important of all of these, however, was the further development of the printing press, catalyzed by the Industrial Revolution. The printing press came into its first modern form in the 1400s thanks to inventor Johannes Gutenberg, but its production remained in the clutches of the Church’s approval for a long time. However, 1760 saw the beginning of the Industrial Revolution, implementing machinery to produce more products in less time. It lasted until 1840, the year of Queen Victoria’s marriage to Prince Albert.

The Industrial Revolution had a major effect on print, using steam-powered machines to mass-produce written work, resulting in a bigger development that would change the world forever: education. By using machine power to create books and newspapers, more people than ever were given the opportunity to learn to read and educate themselves, fuelling the rise of the middle classes. Reading and learning had allowed people to elevate their lives from poverty to comfort, but the mass production of printed music allowed people to climb up the social ladder in a way that had never been achieved before.

The Victorian era gives new meaning to the popular phrase ‘knowledge is power’. Being educated was truly a fashion statement 200 years ago, and accomplishments such as languages, poetry, and especially music, whether as a player or composer, opened doors to event invitations and celebrated connections. Even though the attitudes towards men and women were worlds away from each other, any well-to-do person was encouraged to play an instrument and become musically literate. For men, stringed instruments, woodwind and brass were befitting of a gentleman’s accomplishments. For women, the ‘gentle’ keyboard instruments suited their nature as the softer sex, such as the harpsichord or pianoforte, which we now know as the piano. The major difference between these instruments was the range and volume. The pianoforte had more notes on the keyboard, and, more excitingly, the ability to create a louder sound if one struck the keys with more pressure. An added pedal allowed notes to be held at the same time as playing other ones, creating a much richer, fuller sound.

The price of Victoria’s reign for women

It is unsurprising that the end of the Victorian era brought with it the rise of the suffrage movement. From being a man’s property, having no financial security, no right to their own children, being held against unrealistic social expectations all under the ingrained belief that they were inherently inferior, being a woman wasn’t much like an episode of Poldark. In addition, women were not generally taken seriously in anything far beyond needlework and producing children, which is why we so rarely see literary, scientific, mathematical or musical works produced by women, or at least, under their own name. The truth is, there were numerous female composers worthy of fame and fortune, whose work was rarely given the justice of being heard in the same regard as their male counterparts. To name a few:

Popular events that people indulged in included recitals of poetry and music, but with Queen Victoria’s stubborn and traditional values, theatre wasn’t at the forefront of society in the way that music was. Theatre’s decline was in no way as prominent during the early Victorian era as it was under the rule of Oliver Cromwell, but Queen Victoria’s values didn’t stray far enough to breathe new life into the theatrical world. For a night of theatrical splendour, it was the opera that sold tickets, celebrating the music of esteemed composers such as Mozart, Verdi and Handel. In the case of Verdi, his Italian operas provided a lighter form of entertainment in contrast to the dark gothic styles that were influencing other European composers.

The latter half of Victoria’s rule would see a backlash to her strict rules of social conduct and refined styles. While literary figures like Lord Byron, Mary Shelley, Thomas Hardy and Charles Dickens changed the face of gothic and hard-hitting literature, music was about to be transformed by the likes of Liszt, Wagner and, most famously, Beethoven. Find out how this changed the game of orchestral music in the next instalment of ‘Through the Ages’. 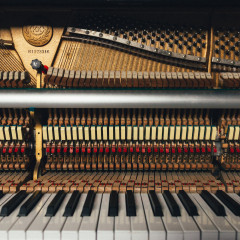