This week we have bygone musician Sir Van Morrison and valiant A-Level students.

Here we have yet another dusty old musician who thinks that because they released some hit songs a few decades ago, they’re an authority on the current coronavirus pandemic. Sir Van Morrison has ever so kindly dropped legal charges he brought earlier in the year against a “blanket ban” on live music in licensed venues in Northern Ireland, which has now been lifted. Of the restrictions, Morrison said “For some reason, completely unknown to me, it [the ban] remained in force in Northern Ireland with catastrophic consequences for many artists, venues and the economy as a whole.”

Now I’m no scientist, but I believe that the “some reason” Morrison referred to is the global coronavirus pandemic we’re still enduring, which necessitates strict lockdowns to limit the spread of the highly contagious disease. But never mind all that, Van Morrison can’t play his live gigs!

Of course, the pandemic has been dire for live performers and crews, but the solution to this is holding governments accountable for supporting these industry professionals, not attacking lockdowns. In 2020, Morrison even went so far as to release three anti-lockdown songs packed with conspiracy theories, which were challenged by the Northern Ireland Health Minister for their dangerous rhetoric. What I’m getting from Morrison is very much ‘Facebook mum sharing minion-themed anti-vaccine post’, and no amount of musical talent can redeem that. Of course he’s not the only time-worn musician to embarrass themselves recently, as he’s been  joined by Eric Clapton and his anti-vaccine rampage.

Will someone tell these dinosaurs that they’d be better off keeping quiet and retiring with their millions?

According to an annual analysis of exam grades, A-level results next week could see high levels of top grades in England, Wales and Northern Ireland. This is the second year in which results have been submitted by schools without the typical final exams. Of course, these predictions have kickstarted the inevitable concerns around grade inflation and the impact this could have on universities.

What debates like this can do for students is make them feel unsure as to whether they deserve their grades under these unusual circumstances. The removal of final exams doesn’t mean they’ve been given an easier ride than previous school years and students should not be punished with lower grades to keep university systems afloat. The ineptitude of this government has only added to the usual stresses of being a student, with the extreme downgrading of A-level and GCSE results and subsequent U-turn in 2020.

Time and time again, young students are used as guinea pigs to fit the needs of institutional systems, rather than the other way around. Given the difficulties and chaos that college students have had to face over the past two years, my hope is that they can block out any self-doubt and still enjoy the pride that comes with finishing your A-levels. 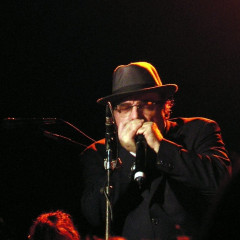 This week we have bygone musician Sir Van Morrison and valiant A-Level students.