With its taboo topics and cheeky lyrics, Lily Allen’s 2009 album It’s Not Me It’s You was the soundtrack to an entire generation’s adolescence.

Even if you haven’t listened to It’s Not Me It’s You, you will have heard Allen’s anger-fuelled anthem F**k You, which at over 200 million Spotify streams is one of her most popular songs. Directed at homophobes and racists, the song epitomises Allen’s brand as a musician: bold, candid and unconventional, and the 11 other tracks on It’s Not Me It’s You provide further insight into her status as an underrated British pop icon.

Summing up the subjects covered in this album is no easy feat, as they cover Allen’s relationship with her dad in ‘He Wasn’t There’, a commentary on the societal pressures women feel as they age in ‘22’, and the stresses that come with fame in ‘The Fear’. There are also more standard tracks that explore love and relationships, but even these avoid being cliche through Allen’s sincere and witty lyricism. She manages to tap into mundane and relatable experiences (like the domestic scene she describes in ‘Chinese’) and turn them into catchy pop songs.

I listened to this album from start to finish countless times (admittedly when I was too young) but it has stayed with me since its release 12 years ago. Allen’s career has gone through its ups and downs in the meantime, but It’s Not Me It’s You still remains a seminal example of 2000s British pop music.

Let us know if you’ve listened to the album in the comments below! 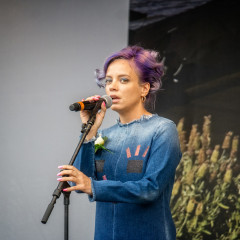 Voice Retrospects: Lily Allen's album 'It's Not Me It's You'

With its taboo topics and cheeky lyrics, Lily Allen’s 2009 album It’s Not Me It’s You was the soundtrack to an entire generation’s adolescence.