Ever wondered what that weird bird call is outside your window? The pretty plant in your garden? Whether that moth is likely to eat your socks? Now's a good time to find out…

I am not exactly known for my technological skills. It’s a bit of a running joke among my friends. Fortunately, I have always had the good sense to surround myself with people who are. As a result, I have learned that my phone in all likelihood harvests data for the Chinese government, but I can make it look like I'm googling from Uzbekistan rather than my own house (using something called a VPN). I’m also told that apparently my laptop is a 'potato', and sounds like it's powered by hamsters. It could well be...

For the unanointed, a 'potato' is a laptop with absolute minimal processing power, a reference to the fact that you can run a very simple digital clock on the electrical potential of a bog-standard potato.

What I’m saying is that I’m not a conventional nerd. I like dirt and being outside, which makes no sense since I have to wear baby's sunscreen to avoid burning, even with cloud cover.

Lately though I've gotten pretty interested in something called 'biorecording'. Put simply, the idea is to catalogue everything alive and vaguely interesting (plants, animals, fungi, whatever) . My personal motivation is to make sure there's a record, in case someone threatens to replace my patch of paradise with something awful like concrete and people.

The effort and technical skill required is minimal. I studied Zoology, and the most inspiring person I met there (I saw him catching bugs in the rainforest in a BBC documentary!) told me that the key was to 'specialise' – to pick one subject and run with it, the weirder the better. (Think 'world expert on mites that parasitise South American fleas). Unfortunately, I have a limited attention span, and it annoys me not knowing a little bit about all the things, so I've gone for a' jack of all trades master of none' approach.

It turns out, this is a lot more useful for biorecording.

There are a bunch of apps out there that only need you to take a picture and guess what it is you're looking at. Then, all you do is hit 'send' and it gets sent to a local recorder (Chief Nerd Expert) to tell you how close to right you are. Importantly, this means that whenever you see something cool, wherever you saw it has a chance of being protected by telling somebody. A lot of these also record your position by GPS, and give you the opportunity to add in extra details (weird behaviour, how many, etc).

This couldn't come at a better time. Lockdown means a lot of wildlife is being given breathing room. Animals are nesting in the middle of paths that no-one can drive to, and plants are doing their thing and growing bonkers, uninterrupted. It also means that people who attack wildlife for fun (they come in a range of mad flavours) more or less have free reign, so it needs our eyes to look out for it.

These apps are all over. Some are super local, some record specific stuff like roadkill, or what your cat drags in! Information is power, and real-time data is helping us track the slow march north of wildlife in response to climate change. It also helps track potentially harmful invasive species.

My personal favourite is iRecord, which is a universal one-stop-shop. Another point to make is that these things are utterly free. It's a good excuse to explore the green bits near your home, to gain some skills and to see your neighbourhood as a network for cool creatures.

If you get to like it, join a Facebook ID group. There's one for everything – literally any beast you're curious about is just an ask away! It's an easy way to meet nature nerds the world over, and now is a great time to talk to people you're nowhere near! It's really that easy.

Don't be a potato, get out there. 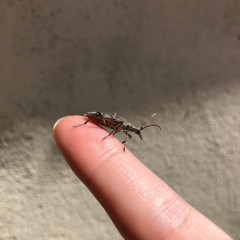 The unknown joys of Biorecording

Ever wondered what that weird bird call is outside your window? The pretty plant in your garden? Whether that moth is likely to eat your socks? Now's a good time to find out…