I am student studying the Gold Arts Award. For this Arts Issue, I have decided to focus on the gender stereotypes and the struggles young men and women face when going into the dance industry. I decided to research deeper into this issue after receiving a comment from a family member regarding an all boys performance at a recent showcase.

'Wow! There are so many boys that do dance in your school! I thought dance was just for girls!' That was a comment I received from a family member after watching a dance showcase. This was the main quote that inspired me to investigate into the troubles that men and women face when becoming open about their love for this subject. The stereotypes and bullying from other peers are just one of the reasons why young dancers may feel anxious when dancing. There is a lot of competition when going into the dance industry for young men and women, however, through all the hard work and determination they put in, young adults can often face struggles from peers when confessing their love for this subject. In this arts issue I will be exploring the challenges and struggles both men and women face since becoming open about their passion for the creative subject.

One of the many struggles that boys face when becoming open about their passion for dance is that it is seen as a 'feminine' subject. In my survey one of the questions I asked was 'Do you think dance is a feminine subject?' 10% of the sample said yes, and 5/8 of those who responded with yes were males. Many men struggle with acceptance with dance due to the certain stereotypes they are associated with, many boys think that it is 'unusual' for men to enjoy dance as they may see it as girly or weak. In 'Dancing Through Distress', the article talks about a young dancer called Nazzaro. He attended an all-boys school which was 'big on sports'. Nazzaro says he would be picked on because he didn't know the latest football facts or baseball statistics, as well as being the only dancer in the school. Matthew Bourne, an English choreographer, created his own rendition of 'Swan Lake' by using all male dancers. Bourne says in an interview with New Adventures that his piece has become more and more popular over time due to the acceptance of males and dance. He says that they had regular 'walk-outs and tears' when watching the Prince dance with eh Swan, however thanks to the wide-screening of the movie Billy Elliot, most of these issues have disappeared. Bourne says the 'The only complaint I get in the piece now is that music is too loud!' My view on this is that it appals me that people are willing to walk out during a performance. I am glad that the views are changing as there are many talented male dancers who deserve to be recognised in the industry.

Being a female dancer can be just as difficult as boys when entering the industry. Girls are seen as 'flouncy' 'petite' and 'balletic' however this is not the case. In my survey, many of the responses to the question 'Do you think there are certain stereotypes in dance?' were 'girls can lift men', 'girls can do hip hop/commercial' and 'women are just as strong as men'. For women, there is a lot of competition when going into the industry. Men however, are at an advantage; due to the lack of male dancers. This is because a university sees a male dancer and is first to accept them due to their talent amongst population.

The phrase 'dance is for gays' came up very frequently in my survey. Due to stereotypical views of dance; balletic, fluent and is most associated with girls, boys can be seen as homosexual due to the femininity of the subject. In an article 'boys don't dance, do they?' Riser talks about the idea that boys who dance, unlike their male peers in athletics and team sports, are participating in an activity that already casts a social suspicion on their masculinity and heterosexuality.'Due to this belief many boys keep dance separate from their peers and keep it to themselves. Although the gender expectations in the dance industry are slowly changing and becoming more accepted, many teenage boys in particular, still have this judgement. People should see dance as a creative, passionate individual, regardless of gender!

In my survey, I asked what the key qualities should be in a female and male dancer, and for both genders, passion was the top answer. 'Men are taking up dance in increasing numbers as a means of developing their performance skills, discipline, collaboration, self-esteem, emotional literacy and confidence, with initiatives such as Boy Dancing being vital in galvanising this change' (Nightingale). Boys Dancing is a project which offers young men opportunities to perform. It challenged to break the perception that dance is primarily and activity pursued by girls and young women.

Both men and women struggle within the industry due to gender stereotypes. Don't you think we should address this issue? Dance is about creativity, passion and a way of 'escaping' everyday life, regardless of gender! I think we change the way that males and females are perceived in dance by starting up more companies that support all types of dancer, like Boys Dancing. We all need to address these stereotypes and accept the talent and passion that these young people put into their dance career. 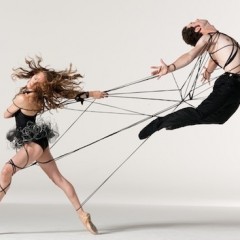 Dancing Through Distress - The Gender Struggles in the Dance Industry

I am student studying the Gold Arts Award. For this Arts Issue, I have decided to focus on the gender stereotypes and the struggles young men and women face when going into the dance industry. I decided to research deeper into this issue after receiving a comment from a family member regarding an all boys performance at a recent showcase.