Voice MagReviewsReview: A Day at the…

This dystopian comedy play just about manages to make up for its chaotic storyline with funny one-liners and interesting dialogic themes.

Written by Jay Lee Vocque, A Day at the Beach is unabashed in throwing all sorts of topical discussions at the viewers. The production wastes no time in setting its apocalyptic scene – the audience is told within the first five minutes that the end of the world is rapidly approaching for our two characters on stage. Barbara-Ann, played by Charlie Cardoza, is described by her counterpart Windy as a “flawed, undiagnosed bipolar disorder having, Electra comic book reading, faith questioning, great singer and good listener’. Windy, played by Dahlia Vocque, is a self proclaimed ‘lesbian, atheist, socialist who dabbles in existentialism and a dash or two of Wiccan’ (I’ve seen many Twitter bios like this in my time). If this sounds to you like too much to fit into a 55 minute show, then quit now while you’re ahead.

The play is structured around a conversation between Barbara-Ann, who has fled her ultra-religious family as the apocalypse approaches and Windy, as they find each other on a secluded beach. Occasionally a character called Skippy appears, played by Aaron Miller, whose whole purpose in the story is that he is “hoping to see some boobs before the end”. Skippy is perhaps the least complicated element of the entire production, as Barbara-Ann and Windy get into discussions about sexuality, religious conservatism, nihilism and family conflict. There are some timely and thought-provoking points made between these characters, as Barbara-Ann blames the end of the world on “one arrogant man” (Jeff Bezos, anyone?) and Windy states that “humans are the leftovers from the last extinction”.

Dahlia Vocque’s performance is the glue around which everything else revolves in A Day at the Beach. She’s comfortable on the minimalistic stage and just about keeps at bay the potential overbearingness of the various identities and issues packed into this tumultuous production. Cardoza and Miller’s characters are annoying and lacklustre in comparison, and Vocque (quite literally) saves the day.

In spite of this, the production ultimately ramps up the ridiculousness to a level I found incomprehensible. By the end, Barbara-Ann and Windy have become completely different characters, and the apocalypse that we have been counting down to for the entirety of the show never rears its head. After spending almost an hour with these characters, the audience is left without closure with this non-ending.

If you’re looking for anarchy with a dash of contemporary debate, then A Day at the Beach isn’t a bad pick, but it’s not for audience members who enjoy coherence in their plays.

You can watch A Day at the Beach on demand at Edinburgh Film Festival here. 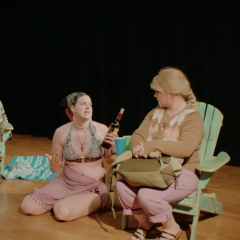 Review: A Day at the Beach

This dystopian comedy play just about manages to make up for its chaotic storyline with funny one-liners and interesting dialogic themes.