Ancient Antics: Mock the Greek impresses with its handmade props but falls short on production and pacing.

Ancient Antics: Mock the Greek opens with handmade finger puppets, showcasing the niche skills of Dodo Dramatics, who are the self-proclaimed “first zero-waste puppetry organisation in the world”. Alongside the puppets, the audience is also treated to a splendid handmade Trojan horse composed of buttons and wine corks, which is by far the star of this 13 minute show.

Deetrius the Great, played by Rhodri Mayer,  is largely forgettable as the lead actor, while the other members of Dodo Dramatics, Katie Fiddaman, Trudi Licence and Ronnie Martin clumsily balance the roles of prop handlers, musicians and voice actors. Licence does appear as Medusa, but once again is outshined by the clever prop of the monster’s head snakes.

The show’s intention to be ‘Horrible Histories meets Monty Python’ is a difficult aspiration to execute. Visually, Mock the Greek appears to be targeted towards children. However, adult jokes (such as an early one about ‘Hermes’ and ‘herpes’) point towards a Monty Python brand of humour – but seems inappropriate for this show’s 12+ age rating. As well as this, the jokes that would be funny are let down by poor sound production, which often makes it difficult for the audience to clearly hear the dialogue.

The storyline is disjointed, jumping from the Minotaur to the Trojan Horse to Medusa with no real connections made between the tales, which would be useful for audiences who aren’t as familiar with Greek mythology. This incoherence isn’t helped by poor editing and awkward set locations (one scene is clearly filmed in someone’s garden with the neighbours’ houses visible in the background, which is understandable due to ongoing coronavirus restrictions, but nonetheless pulled me out of the story).

Ancient Antics: Mock the Greek ends with a nice original song with Fiddaman playing the guitar, but the sense of the show mimicking a student’s media coursework remains.

Overall, Dodo Dramatics’ zero-waste prop construction is admirable, and the puppets they produced truly were impressive, but their production and writing could do with some development. 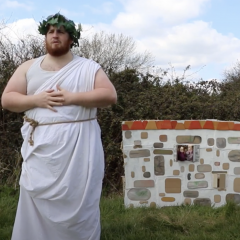 Ancient Antics: Mock the Greek impresses with its handmade props but falls short on production and pacing.