When I first heard about Channel 4’s new series, It’s a Sin, my initial reaction was, ‘oh god, not another coming of age show’. I could picture it already. Rebellious teens: check. Unsupportive parents: check. Big parties in some grotty house that resembles the set of Skins: check!

But then I discovered the plot revolved around the UK’s Aids crisis in the 80’s. That piqued my interest.

It’s a Sin follows a group of friends who move to London in hopes of finding freedom, love, and a chance to be their unapologetically, openly gay selves. With so many loud, lively characters onscreen, the storyline could have easily become overly complicated, but writer Russell T Davies (Doctor Who, Queer as Folk) has a talent for writing believable subplots that effortlessly intertwine with one another.

Over this five-episode series, we watch the characters grow into defined, carved out individuals. We follow Ritchie (Olly Alexander, lead singer of band Years and Years) on his mission to become an actor, while also desperately trying to put distance between him and his homophobic family. Then there’s Roscoe (Omari Douglas), the flamboyant queer who ran away from his deeply religious family who want to send him back to Nigeria to ‘beat the gay out of him’. There’s Colin (Callum Scott Howells), the shy, lovable housemate from the Welsh valleys, and Jill (Lydia West), the mum of the group, who has to make some truly tough decisions as more and more of her friends begin falling ill.

As February marks LGBT+ History Month, now is a great time to watch this incredibly educational series. It sheds light on a huge element of the gay community’s past which is easy to forget nowadays. Gay men are by no means the only people to live with Aids, but they were stigmatised and often blamed for the disease. In 1987, tabloid newspaper The Sun ran the headline: “Perverts are to blame for the killer plague”. Many considered Aids a ‘convenience’ – a way of hoovering up the lives of the queer people that society was not yet willing to accept.

In the show, people with Aids are locked up, hidden away, and treated like monsters. Their deaths are blamed on pneumonia or tuberculosis, and their possessions are all burned. The truth is considered too shameful for families to open up about. Police have no time, or sympathy, for HIV positive individuals. And this may all sound over the top – as if the Aids crisis has been dramatized for television – but it’s the truth. These things did happen. Gay men would fall ill and disappear to die among ashamed families. And as referenced on the show, the police really did say that Aids victims were “swirling around in a human cesspit of their own making”.

This is why It’s a Sin is television at its finest – they suck you in with enchanting characters and an upbeat storyline, and while they have our attention, they teach us a thing or two. It’s an opportunity to speak up about important issues which could so easily be swept under the rug.

However, It’s a Sin doesn’t just teach us about that past – it shares similarities with the present world too. Today, we sift through mountains of fake news in regards to Covid-19, elections, and climate change, while the show’s characters must battle their way through false rumours and second-hand gossip regarding Aids. The characters are learning things as they go, trying to make sense of this ‘gay flu’.

Thankfully, today, people who are HIV positive can live long, healthy lives with medication. But it hasn’t always been this way, and It’s a Sin is a great reminder of how far we have come.

Following It’s a Sin’s characters through such a dark time in LGBT+ history may sound like a recipe for a deeply depressing show. And yes, it is very sad, but it’s also a lot of fun and has a lot of heart. You learn the characters’ inside jokes. You accept their flaws and share their secrets. Ultimately, if you are willing to give this show a go, it will give so much more back. 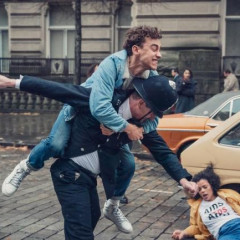 It's a Sin review