Louiza Ntourou’s short film, Radio Silence, explores the topic of family and communication, with a radio serving as an intermediary between a father and daughter.

The film opens with a black screen, as we hear footsteps approaching, before cutting to an extended closeup of a small child putting her ear to a radio as she awaits her father’s arrival. After this occurs, we see the girl walking away as the father begins to lovingly clean the radio with a cloth. This, interposed between closeup shots of the girl staring down the lens, begins to convey the idea of an emotional gap between father and child, as the former’s affection and attention seems to be focused on an inanimate object instead of his daughter.

Ntourou draws this idea out further, with interactions between father and daughter occurring within the context of the radio. As diegetic music from the radio begins to play, closeups of the father and daughter are shown to the audience, though a closeup of the radio is also notably shown in between these shots. This framing offers the radio an active role within the scene, affecting the dynamic between parent and child. We see the child combing her father’s hair while the radio continues to play, a display of affection that appears to be made possible by the inclusion of diegetic music to the act.

The radio continues to play, sitting between both family members as they face each other, before the father disappears, leaving the daughter with the radio as the sole remnant of her parent’s presence. The film closes on a closeup of the radio before another extended closeup of the child’s now distraught facial expression.

The decision to use a black and white colour palette for the short film is striking, with the absence of colour forcing the viewer to pay attention to the frame that is on display for them. Moreover, the understated performances of the child and father convey the paucity of communication between them that is broken only by the sounds of the radio.

A powerful demonstration of the nuances of familial communication through the effective use of a radio as an emotional divider as well as bridge, Louiza Ntourou’s Radio Silence is available to stream on Vimeo now.

We also interviewed Louiza Ntourou, and you can read that interview here. 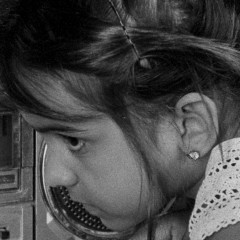