A one-man show starring Michael Patrick, My Left Nut addresses the distress of a swollen testicle and sets this against the backdrop of adolescence, culminating in a hilarious show at this year’s Edinburgh Fringe.

Directed by Oisín Kearney and starring Michael Patrick, with both co-writing the production, My Left Nut follows Patrick as he relates the eponymous experience of having a swollen testicle while traversing the angst of adolescence and pain of familial loss.

The show consists of a one man cast and sees Patrick speak in an extended direct address to the audience for its entire runtime as he explicates the play’s narrative action. Though this runs the risk of quickly turning into a snoozefest, Patrick grabs the attention of his audience and retains it throughout the show, providing a riveting performance.

He throws his voice to portray other characters, including his secondary-school friends Tommy and Conor, whilst sliding to each side of a camera frame. Patrick makes full use of the aspect of physicality with his performance, gesticulating wildly and moving animatedly around the screen with such fervour at points that it appropriately elicits a laugh. While the comedic facet of his portrayal is undoubtedly realised, Patrick also imbues the production with a sense of solemnity at other points that works well as a complement to My Left Nut’s irreverent bawdiness.

The play features a minimalistic setting, taking place in its entirety in what looks to be a shed. This works to its benefit as it creates a smaller, intimate space where viewers are able to focus completely on Patrick and his dialogue. A cutout advertising My Left Nut sits towards the rear of the set, serving as a slight reminder of the show’s artifice but never feeling intrusive to the performance. Furthermore, the choice to have Patrick speak in several extended shots for the duration of the show is impressive, and is only made obvious by the shot changes that happen to indicate a change of topic, scene or perspective.

The effective production of My Left Nut extends to its aural quality, with several songs and sound effects punctuating the 50 minute runtime in different parts. The use of the MSN message notification sound was a welcome blast from the past, while the implementation of Edith Piaf’s ‘Non, je ne regrette rien’ during an ill-fated imbibement at a house party made me burst out laughing.

An uproarious show that utilises levity as a means of eliciting entertainment from the distress of a swollen testicle, balanced by moments of subdued introspection, My Left Nut is a must-watch at this year’s Edinburgh Fringe!

You can book tickets to watch My Left Nut here. 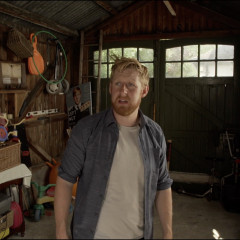 A one-man show starring Michael Patrick, My Left Nut addresses the distress of a swollen testicle and sets this against the backdrop of adolescence, culminating in a hilarious show at this year’s Edinburgh Fringe.