A favourite for children’s TV, Power Rangers has been a familiar presence on our screens since the early 1990s. In this Voice Retrospects, I take a look back at a franchise that proved to be particularly influential for me during my childhood!

The phrase ‘Go, go Power Rangers’ was a common refrain in my childhood, and this would have been the case for many who grew up in the 1990s and early 2000s. Power Rangers was a cultural phenomenon throughout this period, and new series of the franchise are still being produced in 2021! To date, there have been 21 different themed Power Rangers series, in addition to three feature-length films and a host of video games.

Power Rangers was created by Haim Saban and Shuki Levy, and is based on the Japanese tokusatsu franchise Super Sentai. The premise of each season is broadly the same – a group of teenagers are given powers and the ability to ‘morph’ into the eponymous Power Rangers, and must band together to defeat a nefarious villain with the aid of other allies. The seasons would generally consist of 30+ episodes before culminating in a final battle that (usually) saw the demise of the main antagonist of the series. While this structure is seemingly formulaic, I was kept hooked by the ranging themes of the seasons, which varied from dinosaurs to animals, and even time travel, to name just a few.

If there’s one thing that was delivered in spades with each episode of Power Rangers, it was action. I was captivated by the smorgasbord of explosions and large-scale confrontations that would occur between the Rangers and the villain of the episode, which would surely bring a smile to Michael Bay’s face if he ever tuned in. While these action set pieces are admittedly slightly over the top and more spectacle than they are substance, they are most certainly entertaining, and would keep me coming back for more.

Episodes that recaptured the nostalgia of former series were also warmly received. Such episodes include Power Rangers Dino Thunder’s ‘Fighting Spirit’, which followed the veteran Power Ranger Tommy Oliver (Jason David Frank) as he battled for his life by fighting his previous Ranger alter-egos. Another was Power Rangers Wild Force’s ‘Forever Red’, which brought together Red Rangers from previous iterations of the show to join forces in an attempt to destroy the villainous Machine Empire.

Power Rangers can always be counted on for an uptempo and infectious theme song that would never fail to excite me for an upcoming episode. My personal favourites include the openings for Power Rangers Lost Galaxy and Dino Thunder, though the theme for the original Mighty Morphin Power Rangers would also be considered sacrosanct by some older fans of the franchise.

Power Rangers promises to provide something for viewers and fans of all ages, and remains an irresistibly entertaining franchise as evidenced by its longevity (though I wouldn’t be averse to seeing a full-length production of Adi Shankar’s Power/Rangers). 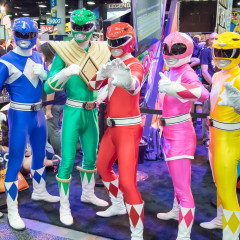 A favourite for children’s TV, Power Rangers has been a familiar presence on our screens since the early 1990s. In this Voice Retrospects, I take a look back at a franchise that proved to be particularly influential for me during my childhood!