Louiza Ntourou is an artist-filmmaker whose work explores and raises questions about the “lost object”. Read on to see our interview with Louiza and find out more about her filmmaking journey and experiences over the last year!

Can you explain the journey you took to enter the filmmaking industry?

Most opportunities arose for me when I was completing my MA in Experimental Film and taking my first toddler’s film steps. I screened my first short film at the Swedenborg Film Festival in 2018, and participated in the Bloomberg New Contemporaries exhibition in 2019. Shortly after, I was lucky enough to be selected by the BBC New Creatives, 2019, which allowed me to produce Radio Silence; the first film I have completed with financial and production support. Since my filmwork is based somewhere on the crossroads between film and the artist’s moving image, it is challenging to define the exact “space” in which it resides. For the moment, however, I find that this creative inbetween offers me a sense of freedom.

What was the production and creative process like when making Radio Silence?

The creative and production process of Radio Silence was really great! As I mentioned earlier, it was my first fully supported film producing experience. My regular practice involves my camera and myself, as I walk through urban or natural landscapes and shoot what triggers my eye. After that, during the editing process, I create short visual poems, “Visual Haikus” as I call them. This was the first time I had the budget to buy a 16mm film, to work with actors, crew and technicians inside a studio. I found this experience really rewarding and challenging at the same time.

The film was shot very much based on improvisation. Obviously there was a rough idea about some of the shots, but I greatly enjoy what actors or people in general spontaneously and genuinely offer to a “story” – and it turns out that it’s quite a lot! The actor, Alex Harland and our little star Luckshy Hickey, who is the daughter of my good friend Callum, very naturally engaged with the “story”. Everyone seemed to enjoy the process of shooting, though I fear this vagueness might have been quite a task for the cinematographer, who was holding a bolex 16 mm in her hands! Jokes aside, Ada Wesolowska is a talented cinematographer and close friend, who was by my side from the very seeds of this idea until the final realization of the film. Her presence, view and expertise was vital. It was also really beautiful to see how warmly the crew of the technicians of Kingston University studio (Souli, Dave and Phil) welcomed, and contributed to, this project. And of course, I cannot overstate the invaluable mentorship and support I received from the artist-filmmaker Phillip Warnell throughout this project.

Overall, it was a beautiful journey, which offered me new perspectives and possibilities to my practice. Looking back at it, I was very excited but also quite stressed at the time. Now, what I felt to be a big mountain, seems merely like a small hill.

Have you faced any difficulties in producing content during the coronavirus pandemic?

Well, the pandemic made everything more difficult, and even tragic for many people. The film industry and the arts were severely affected and I really hope that everything will go back to normal soon. Personally, I moved temporarily to Athens, Greece, where I come from, in order to be close to my family and so I could afford the living costs. I was thinking of the old proverb, “we make plans, God laughs..”; I could never imagine there would be a time like this, when this expression would ring so true!

Producing content in filmmaking was obviously affected due to lack of opportunities, funding, and high competition over limited sources – And of course because of restrictions in proximity and physicality, which is a core component of filmmaking. We should remind ourselves though that creativity survives, because it goes beyond outer limitations, expensive means, theories, and logistics. The thing is, film and the arts are about sharing, and sharing at least for me presupposes co-existing with people in the same time and space. Digital is so freezing cold. Strangely enough, no matter how much I long for this transparent glass – the big screen – that takes me on faraway journeys from a “safe distance”, I do need physicality, intimacy, and sharing in filmmaking.

Are you currently working on any projects and what can you tell us about them?

Yes! I am now finishing my new visual haiku, the “Clouded Yellow”, about an immigrant butterfly to the UK that gets involved in a car accident. At the same time, I am working on another film about a statue named “The Awakening”, which revolves around the theme of female vigilance and explores possibilities of movement on a feminine statue. My ultimate goal is to create my first collection of visual haikus that will result in a moving image mosaic.

What work are you most proud of and why?

Difficult to say, because each of them mirrors different stages in my life and practice. But, if I may cheat a bit and pick two of them, I would say “Once upon a time, a time that never was and always is.”, which is currently showing at Hayward Gallery at the Southbank Centre’s Winter Light exhibition – a physical outdoor exhibition thankfully! I choose this film because it is the one that made me see more colourfully. And, then, “Radio Silence”, because it is the film that reassured me that it is ok to look also through a black and white lens, sometimes...

We also reviewed Louiza’s short film Radio Silence on Voice Magazine and you can find that here! 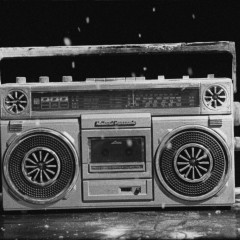 Louiza Ntourou is an artist-filmmaker whose work explores and raises questions about the “lost object”. Read on to see our interview with Louiza and find out more about her filmmaking journey and experiences over the last year!