In Greenlight, a man has an existential crisis whilst staring into the flashing light on his smoke alarm.

You can watch Greenlight here.

For the length of the film we follow Nick (Lewis Gemmill) at breakneck speed through his thoughts, plans and anxieties. Through a mix of quick cuts and exciting music, the film has a very staccato energy to it which really works well. The manipulation of the lights from this alarm also works to create some very cool and interesting visuals throughout. Aesthetically speaking this is a very fun film.

With a mix of Gemmill’s great acting and Josh Brown’s solid writing, Nick really works as an everyman character as he goes through broadly relatable worries like fitness, envy and FOMO. Unfortunately, wrapped into this relatability is a weird undercurrent of misogyny which flares up early on as he calls a woman he doesn’t like ‘a bitch’ in a really offhand way. It’s really hard to tell whether this is meant to be a commentary on the ways in which male anxieties are wrapped in misogyny or if it’s just meant to complicate the character, but it doesn’t land regardless and just feels jarring.

Greenlight ends up being a fun but somewhat uncomfortable venture into the human mind.

We also interviewed Josh Brown, and you can read that interview here. 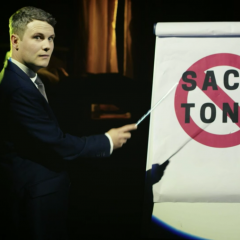 In Greenlight, a man has an existential crisis whilst staring into the flashing light on his smoke alarm.