We talk to Daniel about the inspiration for his New Creative piece 'Bodies', and the process of creating tangible experiences through audio.

What's was the most important thing for you to get right with the piece?

The project began with a fascination with dancing and club culture, and the communities that form within these spaces. As it began to develop, I became increasingly interested in the body itself as a source of vulnerability, pleasure, power, and its conflicting potentials for connection and aggression. Of course, being a body in the world is incredibly politically charged for many as well.

Musically, it felt right to include a strong sense of physicality within the piece, and I knew I wanted to create something derived from the textures of dance music – just slightly fractured and fragmented.

I tried to engage with electronics in a more ‘human’ way than in my past work,

and let the piece be shaped by improvisation, tactility, and malfunction. I was really interested in the contrast between the more stable elements of the piece, with these looser sounds.

Since finishing this work, obviously we’ve seen coronavirus change the world, so it’s strange to look back on. Firstly, to consider how many of the spaces that initially influenced the project will be able to survive, and in what form these communities can exist in this changed world. It’s a reminder of the body’s power, and a real global evaluation of how important contact and connection is to our lives.

What made you decide on the specific instrumentation?

The initial sessions began with a lot of improvisation; lots of recordings with contact mics and little electronic devices. A couple of bits of equipment were in the process of breaking during these sessions, so I got to record lots of interesting glitches and erratic, malfunctioning sounds, which I worked into the final piece.

So mainly it was just experimenting with these sounds – recording with no end goal in mind, listening back to the material, manipulating the sounds, and combining them until I felt that I was creating the atmosphere I wanted.

When I tried a more structured approach, it didn’t really work at all. I was just returning to old methods and styles; it was boring. But it felt exciting to be guided by improvisation and chance – to not think, to remove as much of myself as possible, in a way.

Vicky Clarke, the incredible sound artist who mentored me throughout the process, was really helpful with this, and encouraged me to allow a lot of space and patience for these experiments, and to find ways of integrating more of the environment within the piece. Learning from her process was really influential.

How do you recreate that club experience when you can't be in physical spaces?

I don’t know if you can… it’s an experience so dependent on living bodies in spaces; a lack of self-consciousness and self-awareness.

In saying that, I think it’s important to highlight the online events redefining what a ‘live’ performance or ‘club experience’ can be. I watched a lot of Café Oto’s and TOPH livestreams over lockdown, and there was Tusk Festival last week as well. They did a great job of creating a sense of community and spectacle, and it’s been really inspiring to witness these programmes develop that are genuinely experimental.

I think other elements of what people look for and sometimes find in clubs can also be possible online. I find the links between club culture and internet culture really interesting; how certain people are attracted to these spaces, often after feeling displaced, unwelcome, or unsafe in physical environments – both can offer the ability to express a completely new identity within. The combination of virtual reality technology and clubs seems a natural development to this (such as Club Matryoshka x CTM / Second Life etc.) It’s very exciting to see where it could go over the next few years.

How do you create tangible experiences through audio?

I love the ability to create worlds through audio – so much of what I do is influenced by books, films, art, specific places. I always try and include these non-musical elements and narratives as much as I can.

I find sound such an interesting way to explore these tangible concepts, and to explore narratives around them. Especially within improvisation, where narratives are being perpetually created, and then instantly refracted and re-shaped in a way that’s beyond any embedded logic. It’s a really exciting form of communication

What draws you to the club as a space/experience?

I was a late developer to clubs – initially, I was always too uncomfortable to ever actually enjoy the experience, but I kept trying, feeling that maybe there was something for me there. However even when not feeling a ‘part’ of these spaces, I did always find them so interesting… how people change within them; the connections and aggressions.

It wasn’t until a little later – when I started discovering the right places and music for me – that I began to feel a distant sense of belonging and community within these environments. Like many others, I felt that once I found these spaces I loved, they became so important to my development as a person – slightly different to the person I thought I was meant to be. Spaces to feel safe, free, open, queer, bold, different… at their best, I think clubs can be very beautiful environments which celebrate identity as an ever shifting construct.

What's coming next from you?

I’m currently working on a film with my good friend, David Spittle, a really brilliant artist and writer whose work is always inspiring to me. I’m also researching for a written piece about musical improvisation, the internet, and behavioral prediction / modification. An EP of new material should be coming early next year, as well!

Read our review of Bodies here. 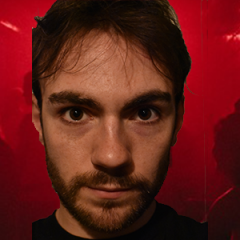 We talk to Daniel about the inspiration for his New Creative piece 'Bodies', and the process of creating tangible experiences through audio.