For some people, stage presence comes a lot easier than others. I’ve had years of theatre and public speaking experience in a variety of shows and formats, so I understand how stage presence can be a difficult beast to master. However, the great thing is that stage presence isn't something that you have or you don't - it can be learned and improved on, and hopefully this guide gives you a launching pad for that.

This rule (and the last) are the most fundamentally important things to understand about having stage presence: All that the audience know about is what you show to them.

They don't know your thoughts, they don't know if your legs were shaking before you went on stage, they don't know anything about what's going on inside unless you show them. And, there's a power in that. I've been on stages with hundreds of people watching - I was terrified that I would mess up my lines, or sing the wrong lyric, but as long as I didn't show that to the audience it didn't matter.

If it helps, detach from your nervous self. Instead of it being you on that stage, it's your character, or it's a version of you that doesn't struggle on the stage. Whether that's true or not deep inside, as long as this is what you project to the audience, you're doing your job right.

2. Project your voice, but don't shout

With very few exceptions, every role on the stage will need you to be heard and to do that you're going to have to be able to cast your voice far enough that it can reach everybody in the room, whether you’re meant to be screaming or (stage) whispering. The key with projection is to talk loudly and not shout.

If you’re projecting properly then you should be in complete control of that sound, with it coming out of your diaphragm instead of just your throat. There are lots of ways you can practice projection, here’s a good National Theatre video of vocal warm-ups you can do to help and improve your projection:

If you get your projection right it should feel effortless. Your voice should be able to fill the room without it looking like you’re straining to do it. As a general rule, always be louder than you think you need to be, even when you have a microphone.

3. It’s not just volume that counts

When you’re on stage, even if the audience can hear you, if your intonation is dull then they will likely zone out before you get the chance to shine. The key to owning the attention of the audience (and the stage) is vocal variation. Even the clearest and powerful of tones get dull after a while with no changes. So, in each individual moment, you should be trying to get something specific across and you can use that specificity to create slight variations in tone, dynamics, and tempo which keep the audience hooked.

Another super important part of having a good stage presence is being ruthlessly efficient with movement. We all naturally feel awkward if we have to stay completely still on a stage. Some of us shift from foot to foot, some put hands in pockets, others (like me) over-gesture, all of these are to compensate for the weirdness of being completely still on stage. However, to get the best performance you sometimes need to stay in that weirdness and instead focus your expressions into the tone of voice, facial expressions, and posture. While movement has its uses, it’s so much more effective when you limit it to precisely what you need to convey your point and/or your character in that particular moment.

5. Think of the worst and work up

Much like the first point, this one is far more fundamental to your attitude rather than the actual practice of performing on a stage. So, whenever you’re nervous about performing, I want you to think of the worst thing that could actually happen on stage and why it would be so bad. Now you’ve got that nightmare situation in your head, you can put it to the side and know that realistically it will never get that bad (it certainly hasn’t happened in my experience).

So, if the worst will never come - what’s stopping you?

Looking for some more tips? Check out this guide on how to own your performance from Opera singer Chloe Lam.

This article was first published 28 September 2018. 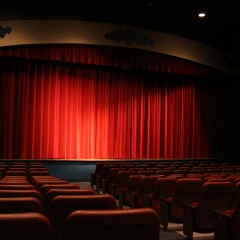 How to have good stage presence