“So the big lesson for me was to stop comparing myself to my friends, or people on Instagram - and if I can’t get past it, I exit the app.”

Please introduce yourself and the film.

Hi, I’m Josh Brown, a filmmaker & video producer from Lincoln. My BBC New Creatives film is called GREENLIGHT. and it’s about a man having an existential crisis in bed fueled by paranoia, social media and pasta bake.

What was the creative process behind Greenlight?

GREENLIGHT. was a script I wrote about a year before the BBC New Creatives scheme, after going through a similar experience to Nick in the film. I’d eaten too much and was staring at my smoke alarm after scrolling through too much Instagram, seeing the amazing adventures my friends were having while I was stuck in my crappy flat in Lincoln. It fuelled me to write the script (which I wrote in two hours) and then didn’t touch for a year. When the New Creatives scheme came around, it was the ideal vehicle for this film, so making GREENLIGHT. ended up being really cathartic! This is the most personal film I’ve made so to see it completed and on the BBC is fantastic.

I wanted to get across the sense of thoughts spiralling and anxiety building, because that’s what often seems to happen when thoughts get away from you in bed - you can’t help but get carried away and you end up wide awake staring at the ceiling.

What were your stylistic inspirations for the film?

This film was initially quite inspired by films such as Dogville by Lars Von Trier, in the sense that the set becomes threadbare on a big soundstage. The red and green lighting was taken as a cue from the smoke alarm light as if we’ve been taken inside of it and the colours intensify throughout the film. I hadn’t intended for the film to feel Edgar Wright-y in style, but it’s a comparison some people have drawn and I can see where they’re coming from!

Why use the flashing light as the trigger for the existential crisis?

The smoke alarm begins to convey how Nick can’t sleep and offers a smooth way into his thoughts. By hearing Nick count the blips, we get a sense of how restless he is. From here, the flashing lights offer a bold colour scheme which Tom and I incorporated into the film, getting more intense, as the film goes on. Part of the reason behind this choice is that this was based on my own experience - I’ve sometimes found myself staring up at the smoke alarm, unable to sleep!

Do you think we worry too much in Britain?

In a word, yes. We seem to fret more than many countries on the continent, maybe that comes with the whole stoic ‘stiff upper lip’ trait that we can’t seem to get away from. I do think generalised anxiety has sky-rocketed, especially for my generation, since the proliferation of social media. The crux of it is that everyone only shares their ‘greatest hits’ on Instagram et al, we don’t see the 99 other mundane activities that make up their life. But we all somehow forget that, and end up feeling dissatisfied about our own lives when looking at other peoples ‘best of’. There are some friends I’ve had to mute or ignore on social media, because their lives make me jealous, or even worse - that my life is not as exciting or interesting as theirs.

A friend of mine Frankie kindly let me use some of her travel pictures in the film, and I told her I had this impression she had this amazing life travelling the world. She told me what she hadn’t included were the really low/boring moments like when she was just looking for jobs in Australia day after day, getting rejected repeatedly. So the person I thought was having an amazing time was actually struggling massively. So the big lesson for me was to stop comparing myself to my friends, or people on Instagram - and if I can’t get past it, I exit the app.

Read our review of Greenlight here. 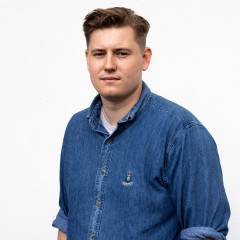 “So the big lesson for me was to stop comparing myself to my friends, or people on Instagram - and if I can’t get past it, I exit the app.”