Comedy duo entertains with inventive theatre, offering a creative solution to dealing with that noisy neighbour.

On a Sunday afternoon, a small audience was led downstairs to a small studio space in Sweet Werks for The Noise Maker. The intimate studio space worked well with the modestly-sized audience and drew us in to the unfolding scenes.

The play begins with two characters; The Brain and The Heart, dressed in large rain ponchos, rapping - I had no idea what the next 40 minutes was going to entail!

We soon discover we’re inside Kate’s mind - an unemployed uni grad, living with her best friend and who are both fed up of their noise neighbour Joe - AKA the Noise Maker. After another night of no sleep, thanks to Joe’s loud, thumping music from next door, the two friends make a decision.

Although at first, the trippy, energetic pacing was confusing, I was soon hooked by the lively and entertaining performance. The intimate space worked to bring the audience in further to the surreal scenes. At time it felt like it was too erratic and disorientating, but I think that’s how they wanted the audience to feel as they bring us in to their bizarre world. Furthermore, the stripped back set and DIY props actually added a lot of comedy and creativity to the show that would’ve been lost in a larger, more “polished” set.

The 40 minute run-time felt perfect - too much longer and it would’ve been exhausting to keep up, any shorter and the narrative would’ve felt unfinished.

The Socially Awkward Theatre Company are made up of two Northampton uni graduates, who are best friends. Their chemistry really comes across on stage and you could tell they were enjoying performing as much as we were enjoying watching them.

Ultimately, it was an inventive, surreal show which was thoroughly enjoyable. I am definitely intrigued to see what this pair come up with next! 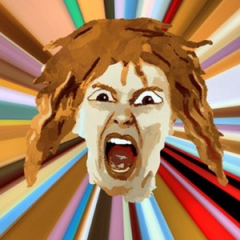 Comedy duo entertains with inventive theatre, offering a creative solution to dealing with that noisy neighbour.