An interesting exploration of our strange relationship with work and careers. However, its darker themes are at odds with the lighthearted tone of the play.

It was my first time in the Rialto Theatre, which is a small, quirky venue just moments away from the late-night shoppers in Churchill Square. The bar is cosy, littered with quirky furniture including some vintage theatre seats and provides a great space for unwinding on a Thursday evening. The theatre room itself is pretty modest but makes a great, intimate space for Fringe performances.

I didn’t want to read too much about Work Makes You Free; just what was written in the Fringe programme. My first thought was that it might play on similar themes touched on in I, Daniel Blake - class division, capitalism, a broken welfare state.

The play revolves around four central protagonists; a young “millennial” actress, a failing singer-songwriter stuck working at the job centre, a Tory MP rising the ranks through sheer privilege and determination (read manipulation) and a “plain Jane” banker, working in Canary Wharf.

They begin as seemingly four distinct entities which begin to merge and entangle with one another as the narrative progresses, until eventually the play seems to swallow itself whole in an ending so meta, I’m not even sure it does actually end.

There were some good meta-jokes about the difficulties of the acting world and our strange relationships to our work and careers. In particular, the four different takes on Monday morning exposed our seemingly ridiculous attitude to it. The narrative was intriguing as slowly their relationships to one another are revealed.

However, the light-hearted tone felt at odds with some of the more darker themes in the play. I was confused as these characters were presented as unlikable, yet it seemed we were supposed to sympathise despite some of their misgivings. In particular, the Tory MP was delivering jokes in-character which I think was supposed to poke fun at his ignorance and privilege, but it felt a lot more like “punching down”. It was unclear what the play was trying to tell the audience and there were a few times where a character would deliver a punchline that failed to earn a laugh from the audience. Hearing the Tory MP character bemoan gay marriage, dismiss mental health issues and label people “lazy” without much reprimand for this behaviour felt uncomfortable. The play’s satire felt at time to have gone too far.

I left the theatre feeling a bit odd. I wasn’t sure what exactly they were going for and although I admired the creativity that went into the story and the structure of the performance, it left me feeling a bit flat. Especially, given the source material they were drawing upon, it could definitely be a thought-provoking and humorous exploration of our obsession and struggles with work and careers within our current political climate.

Overall, the subject matter could’ve fostered some really interesting exploration and I admired the creative structure of the play itself, but the execution was off and tonally it failed to balance its satirical humour with the more darker aspects of the narrative. 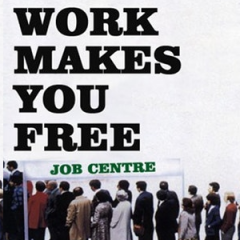 An interesting exploration of our strange relationship with work and careers. However, its darker themes are at odds with the lighthearted tone of the play.