Kitchen Sink is a family drama revolving round a small kitchen in London, 1984, that explored some interesting themes with a dark, dramatic twists.

The Warren was lively, even for a Monday evening and lots of people queued up to see Kitchen Sink in one of The Warren’s shipping container/theatre venues - The Theatre Box.

The narrative revolves around a group of friends all living in a house in London, in 1984. The entire play is set in their kitchen as characters come and go. A pregnant Carly is the central figure and as conversations and events happen around her we see her struggle to come to terms with what motherhood might hold.

The play excelled in its smaller pieces of dialogue as the characters banter and chat with one another, drawing the audience into the interlocking relationships of all five characters, as well as delivering a lot of comedy in these interactions. However, sometimes the casual dialogue went on a bit too long, which affected the pacing of the show but did increase tension building.

It was unfortunate that the small shipping container in The Warren couldn’t drown out the people chatting and laughing at the bar just outside and it did seem to dilute the emotional resonance we were supposed to gain from the broody silences and pauses in dialogue.

There were some emotional scenes dealing with the difficulties and fears associated with being an expectant mother as well as a father and the different emotions associated with each. It dealt with some interesting themes around pregnancy and motherhood but I left feeling like there was more that could’ve been explored. 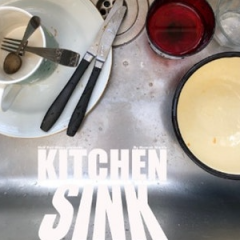 Kitchen Sink is a family drama revolving round a small kitchen in London, 1984, that explored some interesting themes with a dark, dramatic twists.