2. Lack of moderation or due restraint, as in action or speech.

In this version, Zoë Waterman brings on to stage messages about the importance of family and community and their support for each other, because in abject poverty, family is all that’s left. The story humanises the lowest of the low and shows the huge difference between the attitudes between rich and poor. As indicated by the aptly chosen title, there is a lot of drinking: drinking to cope, drinking to celebrate, and drinking for fun, because when you have almost nothing, what else can you do to get through the day? Like any family, they have their ups and downs; there’s passion and anger and hopelessness and despair, but ultimately they have no power over their situation so they must support each other in any way they can.

The setting doesn’t stray from the windowless basement in the Irish community in Liverpool in which they all live together. Designed by Jess Curtis, this room was created by naturalistic set with lit candles, battered piano, worn down bed, all on a rotating stage moved manually by the actors in scene changes. The set represented the lower classes working their hardest, getting jobs, losing jobs, earning money, spending money, but never managing to rise out of poverty – an illustration of the social inequality of the time that is still apparent today. It was a simple but effective way of moving the action for every member of the audience to see every part of the staging because of the in the round space at The New Vic and to prevent the unchanging setting from getting boring.

The idea of the claustrophobia of living in slums was cleverly created by muffled sound coming from all around. Babies crying, families shouting and music could be heard which would underlie a scene. This seemed to surround all of the action, making the space seem smaller and highlighting the idea of a cramped and close community. The horrible living conditions were emphasised by a constant drip coming from a ‘leak’ throughout which I thought was very effective offering a rhythm to the piece. I felt that the absolute realism gave the messages truth and therefore power.

Despite not always understanding exactly what was said due to the fast and strong Irish Accents, the story of each character was conveyed beautifully through all of the acting. Each performance was sincere and truthful and the relationships between the characters were strongly portrayed and stirred up much emotion. At times it was hard not to feel their anger or pain or their utter hopelessness.

I think plays like this are important to remind people to be grateful for what they have and to not judge or look down on people, whether they have more or less than you, because it’s your relationships with the people you call family that really matter, and this production succeeded in demonstrating all of these points with intelligence and brilliance. 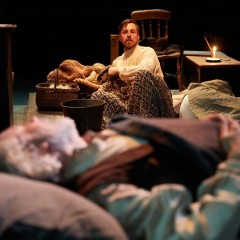 2. Lack of moderation or due restraint, as in action or speech.