When looking for something entertaining to do in St. Ives, Cornwall, I came across a small, original, amateur production happening this month, and it was certainly very entertaining. I called to book was I formed that “it’s pay on the door: we haven’t got a ticket machine and there are  only 30 seats, so let us know if you decide not to come.” This immediately interested me, and so on the 9th August I turned up, not knowing what to expect...

The theatre I entered was a former Pilchard Cellar – low roof, exposed beams and slight smell of damp. The stage was a thrust stage space (audience on 3 sides of the stage) but there wasn’t more than 2 m between where we were sat on stage right and the opposite side of the audience. Least to say, it was cosy. The audience ranged from age 9 (-ish) through to around 70 with a mix of everything in between, and it was clear that none of us knew what we were about to watch. As the mid 20th century music and already dim lights faded, the chatter died down and the room was plunged into darkness.

Written by Jason Calder and directed by Robyn Calder, this murder mystery was one of the most intriguing shows I’ve ever seen. It was performed by Nicole Tesseyman and Jason Calder who played all six characters and I have to say that they played them very well; they are clearly very talented and very creative. The melodramatic characterisation put with a witty writing and comical direction lead to the fact that the whole production was simply very funny.

To me the ‘amateur’ feeling to the production, for example, the lighting sometimes being the actors holding a torch to their face or the deaths being them staggering onto stage holding a knife to the chest, only made the show more comical. I was particularly tickled by some of the puns and ‘dad joke’ humour like one of the red herrings actually being a red herring as well as the regular fish-puns which fitted not only with the Pilchard cellar setting, but the boat-house-in-Saint.Ives theatre. Also, the intimate playing space enhanced every movement, feeling and word, so this put with the mysterious plot grabbed the audience’s attention from the first scream-in-pitch-black moment to the final villain-reveals-all-motives moment, meaning that 55 minutes felt more like 10.

It was only by chance that I came across the advert for ‘murder in the pilchard cellar’, but I’m glad I did because this quirky comedy brightened my week. 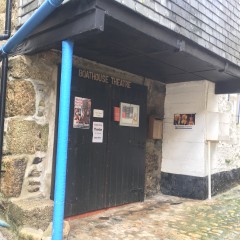 Review: “Murder In The Pilchard Cellar” at BoatHouse Theatre