On Thursday 15th February 2018 I visited Hollie’s Little Cakery in Southborough to see a ‘behind the scenes’ view of a local cake business for my Silver Arts Award, as my art form is cake decorating. I visited with my fellow cake decorator and another participant in Silver Arts Award, Kylie Wates. I organised the event with the admin assistant at Hollie’s Little Cakery, Allya, via email. After a few emails going back and forth, we sorted out a date for us to visit. I had informed them of the task, and they knew that we would like to see some of the work they were doing. Though I’d never been there before, I expected it would be great due to so many other happy customers.

When I arrived, I was greeted kindly and immediately saw and took notice of how beautiful the shop was. It was filled with delicate frames and pieces showing beautiful quotes, kind messages and photos of their previous work. Several photos are included in my portfolio of my Arts Award as I couldn’t help taking a few pictures! Kylie and I then looked around the kitchen, and Hollie had a chocolate cake baking in the oven at the time, so we saw that and saw her take it out. We saw all her tools and were shocked at the amount of ingredients required, and this showed us what we would need for a cake business.

We saw the work in progress of a birthday cake with fondant icing being formed into a man on the cake’s edge, but mainly focused on Hollie demonstrating the methods for making flowers: a rose and a sweet pea. She showed us using a roll out icing that becomes very hard once left for a while. For the rose, she first rolled it to a pear shape, stuck it on a cocktail stick, cut out several thin circles of the icing and stuck layers of two, three and five petals surrounding the centre. She showed us the small details, such as pushing the petals in at the beginning and rolling the outsides to create a curl. It was very informative and helped with my technique a lot. She then showed us the method for a sweet pea by sticking a flattened oval on a wire, sticking one petal on the back and partially wrapping it round, then adding another petal the same way. The curling of the petals was what I found most difficult, but from Hollie’s example I could learn well. These new skills will be applied to my future cakes.

One of the best things about the visit was how friendly the staff were. We happily chatted away, so the decorating barely felt like work! It was also a very interactive experience, as once Hollie had demonstrated Kylie and I got to have a go at trying it ourselves, and Hollie helped us perfect it all the way through. There was nothing bad about the experience, as everyone was very helpful and I learnt a lot. I would definitely recommend the experience as it was so informative, though Hollie’s Little Cakery is very busy as we were told that once they had seventeen orders to make! At the end of the experience, I had learnt how to form a rose and a sweet pea with icing and how a cake business works, along with meeting the lovely staff. 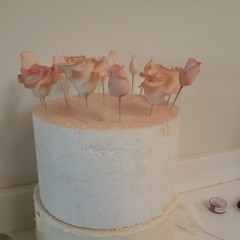