Have you ever watched a film and walked away thinking 'I want to do that'? Well this film did that to me, obviously disregarding the illegal activity but I think if Acting doesn't work out for me, I might go down the 'running a poker game' route. Again, minus the illegal activity.

I was fortunate enough to watch a screening of Molly's Game at my local Cineworld. It was a secret screening so I didn't know, until the film started what we'd be watching but I had seen the trailer for Molly's Game so was more than happy when we found out it was this film.

Jessica Chastain plays Molly Bloom, an ex athlete who moved to LA to start a new life before starting Law school and eventually starts running her own poker game, brushing elbows with film stars, millionaires and artists. Two years later she reflects on her time running the game whilst she tries to sell her book and deal with issues that have now come back to haunt her.

The story is a biological film adaptation of the real Molly Bloom's book 'Molly's Game: From Hollywood's Elite to Wall Street's Billionaire Boys Club, My High-Stakes Adventure in the World of Underground Poker' and looks into her family life as well as her professional life. It is clear from the begining that Molly and her dad have ongoing issues but it is apparent why until near the end.

This film is on for over two hours, but the jam packed storyline keeps you engaged that by the time the film has finished you do not realsie how long you were actually watching it for.

I really enjoyed this film as I love watching Jessica Chastain act, I can't describe what it is about her but she makes everything look so effortless whilst keeping you attention for the whole time she was on screen. The chemistry her and Idris Elba has, even when they're butting heads, was just so captivating.

There's no doubt that this film is a 'drama' but if you enjoy snippets of dry comedy and purity then this is the film for you.

Molly's Game is in cinemas January 2018, and I would highly recommend you go and see it, but hey, that's just my opinion. If you get chance to see it, let me know what you think in the comments below! 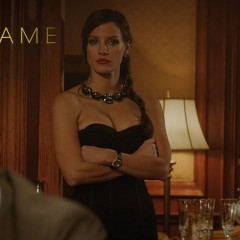 Have you ever watched a film and walked away thinking 'I want to do that'? Well this film did that to me, obviously disregarding the illegal activity but I think if Acting doesn't work out for me, I might go down the 'running a poker game' route. Again, minus the illegal activity.