Plenty of wit and terror in the cinema era of jump scares.

Exceptional casting and direction did well not to emulate the dynamic of the Stranger Things' popular ragtag band-of-losers, establishing a relationship somewhere between Stranger Things and the Losers' Club from the original It. This was especially dangerous given the stellar choice to cast Stranger Things' Finn Wolfhard as Richie.

The youngsters deserve all praise for their comedic performances. Their delivery of cutthroat jibes as well as portrayals of bullied students, with plenty of their own neuroses, provided surprisingly frequent – though not overabundant – laughs.

Discussing the film later on, it became evident to me that it's not worth going into this film with the expectations that we have of modern horror. This is the remake of a film from 1990 and had to stay true to that. It is, for all intents and purposes, mild in nowadays terms save for a couple of terrifying hallucinations.

It is a Hollywood film; beautifully crafted with scenic cinematography and an awe-striking soundscape without succumbing to overkill visual special effects. The town of Derry is vividly designed with a hefty back story allowing us to form an opinion as if it were a real place.

We have a sporadic character structure, which is more of a testament to Stephen King's book than the film. However, director Andy Muschietti was allowed to – and certainly did (spoilers from The Wrap) – exercise creative liberties. We have multiple independent protagonists who eventually come together, which isn't surprising. But we also have two independent antagonists – with the addition of town bully Bowers played by Nicholas Hamilton – who eventually and briefly also come together, not to mention the classically evil parents King created.

For much of the story you feel an enormous pity for our crew because of these separate forces acting against them; to such an extent that it feels too cruel. Oddly, when these forces work together, despite the ensuing terror being so drastic, it feels like a thematic coming full circle. It enables a serendipitous version of events on paper to tie together quite nicely.

The general consensus is that the appeal of the 1990 version lies solely in the hands of Tim Curry who plays Pennywise the clown. As such, we need to discuss how well Bill Skarsgård took up the mantel. Pennywise is the kind of role that actors relish; distinguished, barely human, legendary. With little dialogue to play with but great physicality, Skarsgård does the job of embodying the far-fetched character of a scared child-eating clown.

There are moments some will laugh at that perhaps the producers didn't want you to. Further, the amount of jump scares over genuine terror is a hot topic of late. When we reach the third act, all of which takes place in Pennywise's lair, the fear oozes out. That's not to say that jump scares aren't in there, but knowing that despite being mild overall, as I say, there is plenty to terrify. It delivers a welcome hiccup of huge value and entertainment to a stale slate of Hollywood horror. 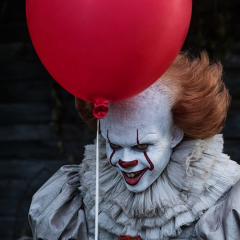 Plenty of wit and terror in the cinema era of jump scares.