Kat Bond treats us to an energetic and unexpectedly captivating hour of loo roll through her hilariously loveable character 'Pat'. Having been left in a bin as a child, Pat is searching for her lost family and has found herself in training to be a 'loo roller'.

Kat instantly charms her audience into her wonderfully bizarre world with ease. From the get-go her performance is fully engaging, her movements are delivered with 100% energy and she has the audience in the palm of her hands. Using minimal props and a lot of loo roll she transforms herself into different characters, particularly note worthy is her hilarious impression of her football fanatic dad. Kat has a natural flare for comedy, but what is most striking about the performance is her acting ability- she fully commits to each character and her physicality is very admirable.

Pat introduces us to the many wonders of loo roll – one of life's under appreciated elements. She sings, she dances, she reads us poems – she takes us on a journey into the life of a loo roller- one whom reads stories from loo roll. It is an undoubtedly bizarre and weirdly wonderful tale, the story of her lost family and her bin-obsession is arguably more enthralling than her life as a loo roller however the triumph of this show is definitely the performer herself.

Kat's audience interaction was a huge part of the show, but it was inviting rather than confronting. The audience was willing to get involved and seemed to very much enjoy being a part of the show, confirming the success of the performance. This was a high energy, thoroughly enjoyable hour of really great comedy. 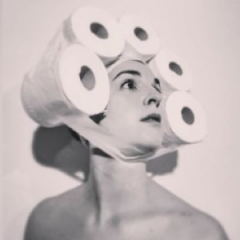