Voice MagReviewsLast and First Men b…

One of the higher profiles on the MIF17 bill, expectations were suitably high for Oscar nominee, Jóhann Jóhannsson's score by the BBC Philharmonic.

Last and First Men saw the BBC Philharmonic performing a score written by Jóhannsson (Arrival (2016), The Theory of Everything (2014), Blade Runner 2047 (2017)) for the film screened alongside. The art feature film was a collection of obscure images panning across and zooming into implacable, otherworldly structures and buildings accompanied by Tilda Swinton's narration of a story.

The images, shot by Sturla Brandth Grøvlen (Victoria (2015)), were very much akin to the high-concept nature of the story, which told of the chronology of the post-Earth, human colony on another planet. We began at a point where Earth was a barely remembered part of human history. By this point humans are both "more human and more animal." Humans have different biological make-ups: live longer and for different amounts of time at each stage of life. The new humans have also cultivated an upper echelon of mental ability enabling a complex hive mind. The new world we see flickers of in these pictures paint a desolate picture of life. The architecture looked neither natural nor man-made.

We learn that the studiers of the heavens - astronomers - are held in a class above the rest. They are given a poetic, Godly nature as they are the first ones to learn of the approaching apocalypse. They are also a rarefied brand of emotionally stunted beings scared of the stars they frequent. Much of this quality was felt in the understated, barely isolated notes from the back of the orchestra. It was often hard to know that the horns were playing.

An apocalypse threatens them with annihilation. They decided to live life well and "die noble" by hatching a genius long-term plan to re-generate the human race after the world is finished. At this point the score straddles between swelling optimism and that desolation to reflect the dichotomy of feelings that must be felt by the new humans.

A multi-layered orchestra of sounds, conducted by Daníel Bjarnason, gave ominous gravitas down to both high and low strings and haunting soprano voices. The latter part of the orchestra and film address the dying days of the new human race. Their planet's ecosystem is in disrepair and people are forced to immigrate to the safest two parts of the planet. The ultimate dystopic tale forces feelings of abject remorse and helplessness from empty images and music – the only human link in Swinton is so far removed as a figure to empathise with that the entire situation is an almost non-human one.

The feudalistic, back-to-basics situation could seem like a redemptive resolution for the narrative because it could bring these new humans back down to our level. Instead, there's such an exhausting distance to the experience that exasperates an audience leaving many emotions by the end quite mute.

A lighting arrangement using lights, smoke and mirrors helped paint the vivid, alien picture. We gain an insight from the performance of scores how different they are from symphonies. It's not about getting each instrument noticed and making sure they all make an impact; it's about the collective effect. It was the quietness of the Philharmonic that made them work so well with this divine film.

There are parallels to be drawn between our political situation involving greed, the popularity of apocalyptic thought, and a tale of resolve and generation of a story of aleatory ruin for a people higher evolved than are we. The images of alien structures perhaps worked too well and distanced our experience from it, though. This resulted in a spectatorial experience that was relentless, beguiling, and bewildering leaving us knowing, at the very least, that we had witnessed something remarkable and beautiful. 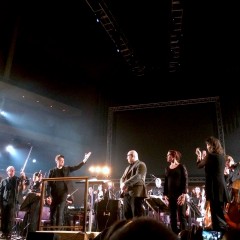 One of the higher profiles on the MIF17 bill, expectations were suitably high for Oscar nominee, Jóhann Jóhannsson's score by the BBC Philharmonic.