Kaur was supposed to be one half of this mega set of three hours from the first Indian artist to perform at MIF, but when forced to carry the whole thing alone, she still blew the roof off.

Before the concert, someone called Kaur "like a rock star in India," which I thought was an odd thing to call a musician of the serene, Sufi style, but I got the point. By the end of the concert, the Lyric Theatre of The Lowry was rocking indeed.

India's greatest contemporary Sufi and Bollywood playback singer was supposed to be accompanied by her Pakistani counterpart in the Sufi world, Qawwali singer, Sanam Marvi, for a world exclusive performance bringing the two countries together using a proud musical traditional across South Asia. However, due to last minute Visa issues, Marvi was unable to enter the UK to perform.

Additionally, the concert was described on the MIF website as including visuals from the HOME1947 exhibition that had premiered earlier that day elsewhere in The Lowry building by double Oscar-winner, Sharmeen Obaid-Chinoy. This was a bit misleading, as the images did not show up in the performance.

Anyway, leading the concert single-handedly, Kaur took to the stage to sing fairly constantly for a full three hours. In this time her voice did not falter in the slightest. The trills and vibrato were flawless and the high notes silenced the buzzing audience in their seats.

She gave us some of her own songs as well as some classics from Sufi legends, Nusrat Fateh Ali Khan and Reshmaji to the elation of the audience. With these there were the up-tempo and the slower melodies giving us a taste of the many levels of Kaur's voice.

A humble, graceful and charismatic stage presence, she knows how to treat a crowd, tease them and keep them going. She spoke a little too much Hindu/Urdu for my liking, but I cannot imagine she could quite make out the audience with the refreshing amount of non-South Asian faces making it the most diverse audience I've ever sat in. All these faces were on their feet with each other dancing in their seats, in the aisles and across the front of the stage. Seeing strangers from different backgrounds try to break out their best Bhangra moves was a powerful sight.

Equally as impressive as Kaur herself was the band, which was surprisingly broad for a traditional style of music, with electric guitars and Maschines. The players were electric in more ways than one. The drops were dirty and the build-ups deeply satisfying. There was a full drum kit and a full set of tabla drums begging the questions of how many drums you need. Answer: that many. With each drop, Kaur would subtly raise her arm in the air to tell us it was time to raise ours while the drummers got to work.

It was a clear spiritual experience for many; brought to their feet, loosening their grips of their inhibitions. It was heartening to hear about and see the reactions by people who did not understand the lyrics. They, too, were brought to their feet by the music and awestruck by Kaur's phenomenal voice. It's one thing to keep singing like that for three hours, another to foster that kind of reaction from a seated audience, many of whom were hearing you for the first time.

Of course, it would've been nice to see everything I was expecting, rather than essentially a third of it. But what we were treated to was conclusive testament to the power of Kaur's Sufi prowess. 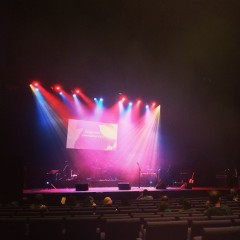 Kaur was supposed to be one half of this mega set of three hours from the first Indian artist to perform at MIF, but when forced to carry the whole thing alone, she still blew the roof off.