As far as swansongs go, Hugh Jackman and Patrick Stewart couldn't have asked for better. After 17 years of playing Wolverine, Jackman is sheathing the claws and has stated he will not be returning, and Patrick Stewart said the same a few weeks before the films release.

Although a shame to see such powerhouses leave the film franchises, they left on a high note, in one of the most beautiful superhero films ever created.

The year is 2029, and mutants are in dwindling numbers. Wolverine, who has reverted back to his real name of James Howlett, is a chauffeur driver trying to make ends meet. His mutant healing factor is failing, wounds are taking longer to hear, and he is in constant pain from adamantium poisoning. He has resorted to drinking in an effort to cope with it.

Hiding in Mexico with Caliban (Stephen Merchant), both have taken on the responsibility for an aging and cognitively dwindling Professor X, who is now prone to seizures that result in psychic attacks - which killed several people including some of his own X-Men a few years prior. He is now kept sedated in a bunker by the two mutants, much to his chagrin.

After a nurse comes to Wolverine asking for help, his quiet low-key life is totally flipped as he winds up responsible for the care of X-23, also known as Laura Kinney (Dafne Keen). For those who aren't comic fans, or hadn't picked up from the marketing, Laura is a clone of Wolverine, with all the ferocity and animalistic tendencies as he. After coming under attack by Reavers, led by Transgen agent Donald Pierce, who has been tasked with retrieving X-23, Logan attempts to take Xavier and Laura to North Dakota to a fabled utopia called Eden.

The film is set to a backdrop of tragedy. The mutant population is dwindling, and while nobody knows why, there is plenty of allusion to a tragic event that took place in Westchester - which fans may know to be the one home of the Mutant academy. It is just one of a number of references made to past events we as the viewer were never privy to. Initially it was distracting, as you try to recall where you might have seen these take place, but you come to realise that it's not important. It's the tragedy and scarring caused that matters, and provides vital explanation as to the actions and mannerisms displayed.

At points the film did jump around and felt jumbled and hurried, but never to the point where it became a serious distraction. Whenever the film ran the risk of losing the plot, Jackman and Stewart brought it back down to Earth with their genuine and entertaining interactions.

Unlike most films, there wasn't a performance that stood out as hammy or poorly cast. The whole film, and the world it created, was low on people, but those who were in it were genuine, individuals you could relate to and understand the motivations of.

Both Jackman and Stewart - as expected - played their roles to perfection, making use of the more adult certification to offer some more realistic dialogue given their circumstances. There were numerous points where I thought, with all sincerity, Jackman could get an Oscar nomination for his performance. It was impactful, conveying real pain and remorse - not what you'd usually expect from a superhero film. Keef did an amazing job of playing X-23, creating a real sense of feral violence and lack of social integration that one might expect from having never seen the outside before. Even Merchant did great as wisecracking Caliban, and the makeup department did a superb job dressing him up as the albino mutant tracker.

Despite its certificate 15 rating, and the amount of violence and gore included, it was never a focal point, nor did it ever feel gratuitous. Isolation, pain, family and redemption were the themes of Logan, and all were addressed exceptionally. The violence and the profanity was necessary to emphasise the emotional toil and real-life interactions that are likely to spawn from living in such a jaded world.

This film, at its core, is both a story of redemption and of family. Stewart takes on, or to some extent, continues the role of father figure to an untrusting and emotionally raw Wolverine, informing him he "still has time" to become a family man. Equally, Wolverine takes on a reluctant father role to X-23, who is essentially feral in the same way Wolverine has been in the past.

The finality of Logan was surprisingly hard hitting. I remember watching the original X-Men in 2000 while in America, and instantly loved Jackman's portrayal of Wolverine. For 17 years, through good films and bad I've seen his character mature, develop, and have his backstory detailed. Now, with Logan, that has come to an end, and I realise that I've witnessed the first superhero actor age out of a role.

It was a bitter reminder that everyone gets old. It's a brutally honest, visceral piece of film, that draws parallels to western movies both explicitly and implicitly. It's the story Wolverine always deserved to have.

This was by far the best X-Men film we have ever been given. Deadpool for all of its hilarity and zany irreverence, lacked a degree of depth. It was a brilliant adaptation of the character, but it wasn't the most well-written thing ever. Marvel, and Fox for that matter, have done great jobs of comic-book adaptations, but they were never emotionally hard hitting. The same cannot be said for Logan. If it wasn't for the mutant aspect of it you would still be able to have a coherent and beautifully told story. It was considered, thoughtful, and sad. There are so many adjectives I could use here, but none really successfully convey the power of this cinematography. If Jackman doesn't get nominated for Best Actor, Logan could certainly be a contender for Best Picture - it was incredibly shot.

All those who are already speculating what next for the franchise are missing the point, and doing a disservice to what Logan is about. This isn't a 'what next' film, it's a 'what's been'. And what it's been is an exception 17 years, capped off with the best film the franchise ever produced.

Farewell, Wolverine. It's been emotional. 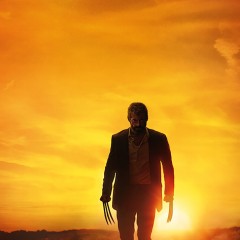