Set on the heaving streets of Birmingham, this short film roves from coffee shops to canals and explores the diverse poetry scene in one of Britain's iconic and innovative cities.

Within two minutes, four open-mic performers have eased the rhythm of Birmingham into their poetry, creating a spiralling dialogue.

"My city speaks to me with the tongues of thousands of oceans."

An element which struck me instantly was the fluidity of the visuals, gliding from one scene into the next. An espresso shot merges into a takeaway cup, feet striding across the pavements and sun bleaches across the lens as the camera pans to view the towering industrial buildings.

Each performer lent a new dynamic to the city and by the end of the film I had a real taste of the atmosphere in such a heaving, pulsing, and nocturnal city.

From the drumming syllables of Callum Bate to the molten sentences of Baz Mason, the film spreads its birth across rap and poetry. Between each performer are eruptions of applause, making the audio equally as absorbing as the visuals. 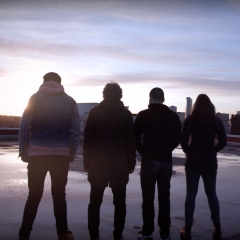 This Movement is Silent by Paul Stringer | FIRST ACTS