I'm one of those people who has a diary but doesn't have anything interesting except it's full of new film release dates.

One of the films I had in my diary was Fantastic Beasts and Where to Find Them, I had the book on pre-order and made sure my friends had nothing else on on 18 November because I was going to see this film no matter what. I have been waiting for this film since they started filming it. They filmed a lot of the film in Liverpool, so when I found out that they were filming another JK Rowling film here after a tiny part of Deathly Hallows was filmed here, I knew it was going to be special. I was also a bit offended that she didn't personally ask me to appear in the film, but I'm sure she was just busy, there's always the next four…

The film was even better than I expected. The story is just so beautiful, it follows Newt Scamander, a name that you should recognise if you went to Hogwarts. He wrote the Fantastic Beasts book that you use in your 'Care of Magical Creatures' lessons. Duh. It follows his journey to America, where he has gone to release one of his creatures back into the wild. You can see right from the start that Newt just has a pure heart and sees the good in everything; even giant, dangerous creatures that even some of the toughest wizards fear. The film was directed by David Yates, the combination that brought us the last four Harry Potter films, so you know we're in safe hands again.

The best thing is that you don't need to be a massive fan of the Harry Potter series to enjoy it. You just need to be a fan of adventure and fantasy and go in with an open mind so you don't compare it to Potter. Obviously there are some references to Harry Potter-related things, like Dumbledore and the use of the word 'muggles', but it's not a requirement that you become a fan of the old books to understand and enjoy this accessible new film.

Eddie Redmayne fitted into the role of Newt perfectly, he was so unbelievably awkward I just wanted to hug him every time he was on screen. The film has a very strong leading cast such as Katherine Waterston who plays Tina, a witch who works for the Magical Congress of the USA. She has appeared in films such as 'The Letter' with Winona Ryder and James Franco and 'Inherent Vice' which won her nominations for awards such as Best Supporting Actress at the Toronto Film Critics Association awards. Eddie and Katherine portray an amazing chemistry on screen, that you can tell is going to turn into something great, right at the moment they meet. Dan Fogler plays a 'no-maj' (the American vernacular for 'muggle') who accidentally comes into contact with the magic world in an unexpected way. He brings the comedy element to the film and has you wishing he was a wizard the whole way through the film so that he can continue his adventures with Newt and Tina and live happily ever after.

I would strongly recommend you go and watch this film as soon as you can. The story is amazing and appeals to all ages; it's just a great feeling to have a wizarding world to be a apart of again. It's like coming back to a familiar place after being away for a few years - it's changed a little bit but the majority of it is still the same. There were also surprise cameos to look out for. I don't know whether I was just really good at avoiding but it was a pleasant surprise to see them. I can't promise that the next time I see Fantastic Beasts will be the last time I see it in the cinema either. 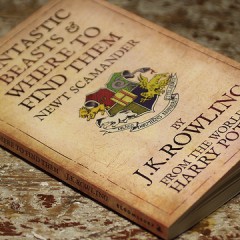 Fantastic Beasts and Where to Find Them

I'm one of those people who has a diary but doesn't have anything interesting except it's full of new film release dates.