It's that time of year again when Little Mix release another wildly anticipated album.

Last year, they released Get Weird, an album they had been working on for around a year, a sort of come back album if you will, as they'd been hiding away writing for months and months. This year it was Glory Days' turn to be shared with the world. Since Little Mix have been on a roll this year, with a sell out tour under their belts, two Brit nominations, and the chance to perform at the Brits, it was only appropriate that they bring out an amazing album to add to their list of amazingness.

When I became a fan of Little Mix in 2011, I was 13 years old, at that awkward teenage girl stage, where I didn't know what I wanted to do with my life and didn't quite know who my friends were and all the other issues teenagers have to deal with, and having Little Mix around at that period of my life was something I'm sure a lot of teenagers were grateful for. Their poppy, upbeat and colourful album had messages in it that everyone could relate to and apply to there own lives. As I've grown up, so have Little Mix, the past few albums have matured with them, the sound of Glory Days compared to their first album DNA is just what I look for in an album, now that I'm 18. Now that they're not teenagers anymore, they're starting to use their music to tell stories of their own experiences they've had as they've matured rather than shying away from the real stuff because they have to stick to the girly, pop music they brought out, when they first started. The music is now appealing to people all ages, young and old, rather than just the children and teenagers it appealed to a few years ago.

If you listen to DNA and then listen to Glory Days you can hear the change in the way they write, the lyrics are more personable and risqué. Which is something I think more artists should explore. Just because they have young fans doesn't mean they should just target their music towards them. This album is a proper party album. It's the sort of album you stick on when you're getting ready for a night out. It features songs such as Shout Out To My Ex, the recent single that spent three weeks at number one and gained them an older fanbase and widen the younger fanbase. The album features artists such as Charlie Puth and if you get the deluxe version you get an edition with 14 videos of performances from the Get Weird tour.

One of my personal favourite songs from the album is You Gotta Not, I first listened to this song a few weeks ago when they released it early and ever since I heard it I've been obsessed. Every time I hear it, it makes me want to start dancing, I can guarantee it will get everyone up and moving every time they perform it. Another favourite is Touch, another upbeat song that makes me want to dance but on the Deluxe Edition there is an acoustic version of the song, which is just beautiful. It's one of the songs that really supports their voices well, it showcases how well all four of them can sing. If there's anyone who has any doubts on whether they can actually sing (I'm sure there isn't), just listen to that song and be prepared to be blown away!

Little Mix will be taking the Glory Days album on tour next October starting in Sheffield. To get tickets just go to their website www.little-mix.com or Ticketmaster, but go quick because the tickets are selling fast! 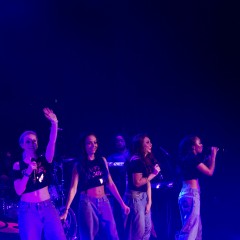 It's that time of year again when Little Mix release another wildly anticipated album.