Mark Watson's Edinborolympics is a show that, in my opinion, can't really go wrong. I don't mean this in the literal sense, as several things did go wrong (and made the show even funnier), but in the sense that having four talented comedians on stage making fools out of themselves can never fail to make an audience laugh. Watson has different guests on each night; I was lucky enough to see Daniel Sloss, Nish Kumar and Felicity Ward, with a special appearance by David O'Doherty. The audience were split into three to support each contestant and frequently called upon to help their comedian out by giving advice, moral support, and the clothes off their backs. Literally.

Watson is a brilliant host; his witty and perceptive commentary provides a hilarious undertone to the series of ridiculous tasks the contestants must face. Sloss, Kumar and Ward and their partners (volunteers from their section of the audience), spent the best part of an hour giving piggy backs, running around in black bin sacks, erecting tents, making hot dogs and throwing oranges at towers of toilet rolls. There was plenty of sabotage, lots of competitiveness and, of course, plenty of jokes. All four of the comedians interacted seamlessly, which kept the laughter flowing from the audience. It was clear that everyone thoroughly enjoyed the show, although at times it was difficult to see as I was sitting very far back. If you do go to the show, I would definitely recommend queuing up early in order to get a seat near the front.

A brilliant show that will end your day on a high.

Mark Watson's Edinborolympics is on at 23:00 every day until August 27th at Pleasance Courtyard. 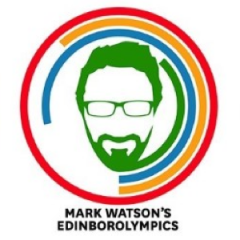