Three identically and unusually dressed strangers turn up at a girl's doorstep in the middle of a snowy night. An intriguing premise for an intricate plot, a philosophical reflection, and a very funny show.

On a cold night, in a remote and unidentified part of Sussex, in the middle of a snowstorm, three identically and unusually dressed strangers turn up one after the other at a young girl's doorstep, where she dwells inside, cosy in her pyjamas and absorbed in a solo game of Snakes and Ladders.

At first she is suspicious, then she relaxes and helps them warm up, they could even become friends around that board game…but here comes the plot twist.

As crude as the title sounds, A Dirty Get-Away, written and directed by David Weedall, is in fact a little piece of absurdist theatre, which leaves the audience amused and warm despite the snowstorm outside, which is convincingly represented through a skilful use of sound effects.

All five characters are caricatures, funny in their own way, and none of them prevails over the other; on the contrary, as they make their appearance one by one, they each add a new element and equally contribute to this comic, chaotic and choral performance.

Perhaps the absurdist component could have been stressed a bit more – the paradoxical situation would have easily lent itself to some sort of reflection on the human condition, identity and the like. All the elements are there, the identical clothes, the game, the cottage in the middle of nowhere, even the young girl who at one point goes out in the storm herself. But this moment of reflection doesn't happen, or at least not explicitly. Maybe it's just left there on purpose to linger amongst the spectators who are certainly wondering whether they should just be amused or expect something more, 'What's beyond?' more than 'What's next?'. Slightly disappointingly, the characters seem to be more concerned with the latter question, too busy trying to make sense of a situation that could have easily remained without.

This show has now ended at Brighton Fringe. For more information, head here. 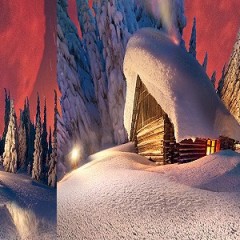 A Dirty Get-Away! by David Weedall

Three identically and unusually dressed strangers turn up at a girl's doorstep in the middle of a snowy night. An intriguing premise for an intricate plot, a philosophical reflection, and a very funny show.