Baba Brinkman and Dr. Heather Berlin bring science and hip-hop together in Baba's second comedy show at this year's Fringe.

A science, hip-hop, comedy, improv show is bound to be pretty original. Sitting in a bar, I felt like I was in the best lecture of my life. It opened with Baba rapping the show's introduction and then another little science ditty. Rather than climate change in his own Rap Guide to Climate Chaos, this show busied itself about neuroscience and the way your brain acts when you creatively make things up on the spot.

The pair would get the audience involved in a series of brain performance tests which test how much multi-tasking one can do, and to what degree. As well as unendingly entertaining, it was jaw-droppingly fascinating.

With each test, things were heightened, made harder, and eventually an element of freestyle rap was introduced and tests became about what tasks can be performed whilst performing freestyle. It was almost entertaining enough just seeing how hard it was to do things whilst rapping. Baba's freestyle skills were hugely impressive. A talent to seldom seen on arts and entertainment circuits at festivals.

This coupled with the themes and lessons by Dr. Berlin, we were subject to an hour of profundity. On top of these, there were anecdotes about how Dr. Berlin and Brinkman met and how he wooed her after meeting.

It was well orchestrated and erudite – far from the regular and certainly far from my expectations of what to see in an underground bar in Edinburgh. But then, that's a folly underestimation of the magic of the Fringe. Something as idiosyncratic as this and Brinkman's other show demonstrate precisely that, the magic of the Fringe. A more charismatic or humourous approach to the delivery of the science wouldn't have gone amiss. A slight niggle in an otherwise thoroughly innovative routine. What's more is that I feel it warrants a slightly longer slot. It seemed a bit rushed.

I want to see them again and again – I'd have done much better in education if I'd been taught by the pair. I'd probably even be a neuroscientist. The pair deserves recognition for such a momentously important show. Pure, unashamed geekery.

Catch Off The Top at The Canon's Gait on Canongate just down the road from the Royal Mile at 12:10 for the rest of the Fringe except 18 August. Baba and Heather are performing on the Free Fringe and so don't forgive to spare a bit of money to donate if you enjoy them as much as us - https://tickets.edfringe.com/whats-on/off-the-top 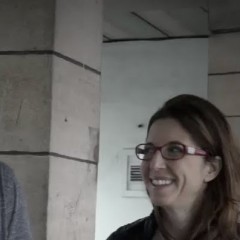 Baba Brinkman and Dr. Heather Berlin bring science and hip-hop together in Baba's second comedy show at this year's Fringe.