I was intrigued about going to see Noman's Land. Intrigued about how a former journalist in Pakistan was now in the business of giving a one-woman show.

Noman's Land took us through the trials and tribulations of the portion of her life during which she was a half English, half Pakistani, lesbian journalist for a Pakistani publication. It was not as political as you'd expect a show with that kind of description to be. Instead it was a tender and conscientious treatment about her own encounters many of which had little to do with the Taliban or patriarchy.

She had a remarkably well balanced show. The drama and comedy complimented and worked towards each other. Her mimetic Pakistani accent and pidgin Urdu gave characters explicit clarity with her delivery. Her self-deprecation provided the show with some light hearted ridiculousness and every new real life character was almost as dysfunctional as the last.

Every so often, she would switch to anecdote mode. There was no knowing whether the anecdote would be hard-hitting or hilarious. Often, it was both. Either way, the emotion that it would evoke would be worth the uncertainty.

The dry delivery and witty and expert writing made this show a thought-provoking joy.

What may not have suited it though, was the simplistic production value approach. A show which traversed cultural as well as geographical boundaries and wove us through such a diverse myriad of stories felt as if it deserved a certain aesthetic oomph. Lighting and props – even on the tiny stage she occupied – could have made this quite a visual delight without detracting from the narrative.

Essentially, the narrative was strong, cerebral, and witty but a bit more visual storytelling would set it alight.

Catch Natasha Noman: Noman's Land on the Balcony at the Gilded Balloon at 19:45 until 15 August - https://edinburghfestival.list.co.uk/event/482844-natasha-noman-nomans-land/ 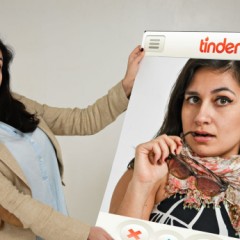 I was intrigued about going to see Noman's Land. Intrigued about how a former journalist in Pakistan was now in the business of giving a one-woman show.