A big finish begins this exquisite show, as we join the clown Scaramouche Jones in his final hour, after his final performance, on the final day of the year 1999, as he converses with us "ghosts" about his life and his 7 white masks. This show is a monologue that tells a wonderful story, although once the story starts to be told, one can easily forget that there is just a solitary person on stage. That 'just one person' can portray all those characters, with varied, clear and consistent accents, from Barbados to North Africa - it is easy to forget his is alone on that stage.

Thom Tuck (from BBC 4's Penny Dreadfuls) plays the titular character Scaramouche Jones, a 100 year old clown, born to a Barbudan prostitute and son of an unknown Englishman, with the palest face you can imagine. I have to say that I can not fault Tuck's performance. It was flawless. His comic delivery was perfect, from the build up to the delivery of the joke. From the moment the piece began the audience was entranced, scarcely breathing except to laugh or sob – and believe me, this piece will have you doing both, probably at the same time. As I've said previously, the voices of the different characters were perfect, but even better than that were his eyes. When you see this show (and you should) take note of his eyes, how me moves them perfectly, and manages to maintain eye contact with the entire audience at the same time.

The pacing and writing of the piece were perfect, at no point did I feel the need to check my watch (as I often do with monologues, as they tend to drag on a bit), and never did I feel the need for him to slow down, so I could get to grips with where I was within the performance. He paused at exactly the right moments, letting his words sink into the audience, which they readily took in, eager for the next sentence. Indeed, the story is compelling, and is made more so by Tuck's performance.

I have only one slight nag, and it doesn't even lie with the show itself, but more the venue, which was not very well insulated against sound, causing the murmur of conversation, and the occasional bit of music, to drift through into the auditorium, causing a great deal of irritation to myself, as it completely took me out off the play.

Scaramouche Jones is a superb show, and I can not more heartily recommend that you see it. It's hilarious, and tragic and everything in between. I'm also pretty certain that it broke my heart at least twice.

Scaramouche Jones is being performed in the Underbelly on Cowgate, until the 30th of August. Performances start at 12:20 and last for one and a quarter hours. Tickets cost £9.00 Monday-Thursday, and £11.00 Friday-Sunday. Seating is unallocated, so arrive early to get a good spot! For tickets, or more information, please go here. 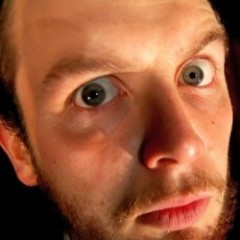