In director Baz Luhrmann’s signature glitzy style, he truly goes to the Vegas casinos with Elvis, and it’s paid off – as they say, the higher the risk the higher the reward is. This film has certainly secured big bucks at the box office, and for good reason.

You know Elvis Presley. The King of rock ‘n’ roll whose likeness remains today in officiators for Vegas wedding chapels and whose songs have captured the memories of generations that have come after his time.

One of Elvis’ most famous quotes is “Don’t criticize what you don’t understand, son. You never walked in that man’s shoes” which is interesting, because in Elvis we don’t walk in his shoes, we’re put in his manager’s.

Elvis takes a unique approach to a biopic in the sense that it’s primarily told by the film’s antagonist Colonel Tom Parker (Tom Hanks), Elvis’ unethical manager who was found to have financially abused Elvis throughout his life and career. This choice of perspective is fascinating, the audience sees the abuse and Elvis’ health slowly deteriorate throughout the film – something that Elvis from his own perspective, might’ve not been able to see. It makes the cruelty of the Colonel’s actions even more difficult to witness.

The unusual plot structure takes us on Elvis’ rollercoaster journey to fame. Audiences are invited to spectate glimpses of his life that seem like quick paparazzi flashes before our eyes. This fast pace drives home the sensationalism surrounding Elvis as a cultural icon, from his early career with shows packed full of screaming girls to his acting career and 7-year Las Vegas residency.

It’s glitz and flashy, nothing more than is expected of Baz Luhrman and an $85 million dollar budget. In the same vein as his previous films Great Gatsby (2013), Moulin Rouge (2001), and Romeo & Juliet (1996) – there is something undeniably charismatic and timeless about Elvis. Perhaps, it is the source material and that it’s based on a literal cultural icon that makes it good. However, there are countless references and depictions of Elvis Presley on screen that don’t make the cut – so why does Elvis have all the right cards up its sleeve?

Enter Austin Butler. Butler’s likeness, in both appearance and personality, to Elvis is uncanny. At times there are moments where archival footage and film footage are intertwined to the point where it is difficult to pinpoint which is the real Elvis. Speaking at a Cannes Film Festival press conference, Butler said “I put the rest of my life on pause for two years … and I just absorbed everything that I possibly could”.

From the three-octave vocal range, distinctive husky rockabilly sound and uncouth dance moves – Butler has it all down perfectly.

The film has its downfalls, including the lack of addressing the real story of how Elvis met his ex-wife Priscilla. Similarly, there are also a few directorial choices at the beginning that visually won’t age well.

There’s also the inclusion of modern music throughout the film including ‘Vegas’ by Doja Cat which has now become a TikTok staple. These are welcome and humbling additions showing the influence Elvis Presley has on the music industry – although it is a touch jarring, and does take you out of the plot slightly.

There are also some real gems in this film including Bristol-born Yola as Sister Rosetta Tharpe and a shot-for-shot recreation of ‘If I Can Dream’ from Presley's ‘68 Comeback Special finale.

Elvis hits the jackpot, both with its critical acclaim and with its box office success. Unlike Elvis Presley’s music and like most biopics, I do wonder whether this will stand the test of time with its replayability. 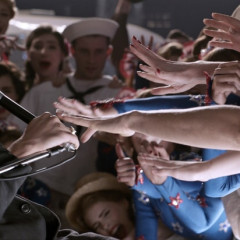