Lightyear is the latest entry in the Toy Story franchise, though it’s not exactly what you’d expect if that was all you’d heard about it, because, well… There are no toys in this film. Rather, Lightyear — as it tells us at the beginning of the film — is the film from the Toy Story universe (Andy’s favourite film since its release in 1995) that the Buzz Lightyear toy was based on in the first place. If it sounds a little confusing, maybe it is, and that’s because Disney’s reliance on nostalgia has grown so tedious that just making a Buzz Lightyear themed film isn’t enough: they also have to remind everyone that Lightyear is technically a Toy Story film by throwing in an entirely pointless message at the beginning of the movie. A message that will no doubt induce eye-rolls more than nostalgia in anyone that’s even remotely tired of the endless franchises and sequels.

The concept that Lightyear is built on is one that invites the kind of sentimentality and emotion that Pixar are usually great at delivering. Buzz crash-lands on a distant alien planet with a massive crew, and in order to return home he has to get a hyperspeed crystal working. The problem is, whenever he has a test flight, travelling at such high speeds dilates time, and he always returns from his missions having aged a mere few minutes while everyone else back on the alien planet has aged four years. Early on in the film we see a montage of his many hyperspeed flight attempts, and his many returns to the alien planet (where the others build an impressive looking base despite the alien vines that are always trying to grab people), and every time he gets back, his best friends and colleagues get older and older. It’s somewhat reminiscent of the montage at the beginning of Up, yet it packs absolutely none of the emotional punch that the 2009 film had. It feels completely flat, and therein lies the problem with Lightyear as a whole. It is painfully derivative, borrowing a bunch of different elements from a bunch of different films, and worst of all it never improves upon any of what it borrows. There is no originality to be found.

The characters and script feel as though they were written by an algorithm. Plug in some general screenwriting concepts, some classic films, some genre tropes (like the quintessential cute animal sidekick that is present in countless Disney films), and some characters that tick popularity boxes (such as Taika Waititi playing himself, which has gotten far more boring far quicker than anyone probably expected), and voilà: Lightyear. It completely lacks emotion because it feels like it was created in a lab.

As expected, the animation is as fantastic as ever. At least that’s one thing Pixar rarely disappoints with. It all looks wonderful, and while it’s understandable that Lightyear was released exclusively in theatres on a purely technical standpoint (releasing a brilliantly animated sci-fi epic on streaming would be criminal), it also feels like the least cinematic Pixar film of the last few years, because it lacks the heart and imagination that the likes of Luca and Turning Red — which unfortunately were released onto streaming immediately — had. Lightyear doesn’t feel epic at all. It’s a science fiction movie set millions of light years away from Earth on an alien planet, and the most creative thing they do with alien life or environments is have some vines that try to drag people away. The villains of the film are literally just generic robots. How could they be so starved for creativity?

The most emotional response you’re likely to have during Lightyear is relief when you see the credits roll. It’s not even that it’s egregiously bad. It’s that it’s such a pandering, derivative mediocrity so lacking in creativity or risk-taking that it would be offensive if it weren’t so boring. 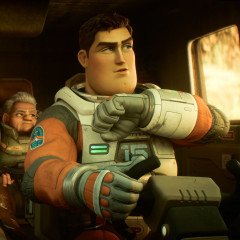