A review of Chip and Dale Rescue Rangers.

THIS REVIEW CONTAINS SPOILERS FOR BOTH CHIP AND DALE RESCUE RANGERS AND DR STRANGE: IN MULTIVERSE OF MADNESS

Chip and Dale Rescue Rangers is a movie that makes me incredibly angry. Not because it’s the worst thing ever, I mean if I was to look at it objectively I would probably call it a fairly boring and generic film. No, the real reason I hate this film is because it seems to be doing the same thing that movies like Space Jam a New Legacy did where it instead focuses on making a bunch of references for people to squeal over on social media instead of making an actual good story. This includes showcasing Ugly Sonic, you know, from the original trailer for the Sonic Movie, he’s here for some reason. Or how about showing characters like Randy Marsh and Roger Rabbit in the background, look you recognise them so it must be funny, or what about the scene where a character played by Seth Rogan encounters other characters he’s voiced, see it’s funny because Seth Rogan voiced them and showcase’s how much of a terrible Voice Actor he is. Seriously this is all over the film and it’s so frustrating, there’s literally scene where for no reason we see the main characters from My Little Pony and it’s literally right in your face, I like My Little Pony but that doesn’t mean I like the cameo because it’s so forced, pandering and distracts from the film. I could go on but I don’t want this to just be about the cameos. I know it might be weird start with this, but that’s pretty much the main gag of the film so I might as well get it out of the way now. So what about the rest of the film.

The film stars Chip and Dale in a world inhabited by both humans and animated characters where they are actors for the show Rescue Rangers. However, they end up fallen out after Dale leaves the show to work on his own project. They are forced to reunite after their co-star Monterey Jack is kidnapped by an adult Peter Pan who is kidnapping cartoon characters to make his own bootleg cartoons, so it’s up to Chip and Dale to put an end to this. All right let’s get this out of the way right now, making an adult version of Peter Pan the villain is disgusting. In the film the reason for Peter Pan becoming evil is because once he started to get older no one wanted to hire him, which is the exact same thing that happened to Peter Pan’s original voice actor Bobby Driscoll. Disney hired him to be their next child star but the second he started getting acne (which Peter in the film is clearly shown to have) Disney sacked him and his life spiralled down where he ended up dying at age 31 on his own due to drug use. I refuse to believe that this was a coincidence and even if it was they should have checked first. And what’s worse is that he doesn’t get redeemed, he ends the movie as this complete monstrosity and is arrested. Screw You Disney. The rest of the plot is fine I guess but it brings up another big issue with this I have, why is this a Chip and Dale movie. Full disclosure, I have never seen an episode of Chip and Dale, but I know this has nothing to do with the show and I almost feel like it would be better if the movie used original characters’ kind of like Who Framed Roger Rabbit did. Actually speaking of Roger Rabbit, another issue I have is with the world and how, little sense it makes. So this is a world populated by Real People and Cartoon’s, but the cartoons just seem to be there. Think about it, in Roger Rabbit the toons have their own town and part of the conflict is how they don’t own Toontown. That doesn’t happen here, there’s no issue with the toons at all which just doesn’t make sense. You could easily make this a film about how animated characters’ struggle to find work after their show ends or how the humans look down on them for “not being real”. You could even bring in some commentary about how cartoons are considered stuff for kids. But instead it was just done, for the previously mentioned references. You could have made this movie just animated and nothing would have changed. Also what are the rules of animated characters. Going back to Peter Pan, he is the only animated character in the movie to have aged, but later on he sees one of the lost boys from the movie and there still a child, that doesn’t make any sense and makes the connection to Driscoll even more blatant.

As for the other characters they're fine I guess but they're just incredibly generic. As mentioned earlier Chip and Dale may as well be original characters because they act nothing like themselves and are also given normal voices instead of the high pitched voices from the show. The only character I kind of liked is Ellie and that’s only because I found her being a fangirl of Chip and Dale to be kind of cute.

The voice acting in this movie is terrible with the exception of J.K. Simmons and Will Arnett but even then they’ve had so many voice acting roles that they're always going to do a good job. The two worst performances have to go to Seth Rogan and Jon Mulaney. Rogen is obvious because he never gives a good performance (seriously stop hiring him for Voice Roles) but I think Mulaney is somehow worse. It doesn’t help that he’s the main character of the film but he never, ever, changes his tone of voice and because of that he ends up sounding bored. The worst part comes at the end of the movie where Dale has a fake out death (which I will get to in a minute) and Chip starts getting sad and talking about how they first met, and yet he doesn’t sound sad at all and still does the same boring tone. The only voice actor to reprise their role in the film is Tress MacNeille as Gadget but she’s only in the movie for a few minutes so it feels more like they just couldn’t be bothered to get someone else in. Mark my words if she had a more prominent role she would have been recast. I say this because Monterey Jack despite also talking for a few minutes, is the main part of the story and they instead decided to have Eric Bana voice him instead of his original voice actor Jim Cummings even though Cummings makes multiple cameo appearances in the film as other characters, what the hell Disney.

Now let’s go into the comedy and oh god I have a lot to say here. Let me start with the jokes I liked. Uhhhhh, There’s a part where we see that Chip has a dog and the dog is bigger than him, that was actually quite clever. There’s a part where a car nearly gets hit by something and you see that it’s a car from Cars who dodges, that got a chuckle out of me. And that’s pretty much it, everything else just sucks. It’s either a reference or an attempt at being self-aware or meta. Here’s an example, early in the film we see an advert featuring Alvin and the Chipmunks rapping and Chip say’s “man I hate it when animated characters’ start rapping”, guess what happens later, yep, Chip and Dale start rapping, see it’s funny because they made fun of it earlier and now they're doing it. No, it’s not funny just because you acknowledge something is dumb doesn’t make it any less stupid. Another joke like this happens when it’s revealed that Ellie’s boss is actually working for the villains and before you can say “wow what a shock, I didn’t see that coming” the movies already made that joke. Again, just because you say it’s unoriginal doesn’t make it any less unoriginal. And it then becomes laughable when as mentioned earlier, they do a fake out death for Dale and it is played completely straight, despite that being one of the most over used tropes in film, especially in Disney movies to the point it is literally called a Disney Death on websites like TV Tropes. The biggest problem with some of the Meta jokes is that it’s coming from Disney so it becomes either incredibly tone deaf or they aren’t actually jokes and people are claiming that they’re self-aware gags when they actually aren’t. For example, there’s this poster for Mr Doubtfire starring Meryl Streep, at first I thought that maybe this was a jab at female reboots but, no, it’s not. They just thought it would be funny to change Mrs Doubtfire to Mr Doubtfire. There’s nothing clever about it. Same for when Dale keeps talking about making a Rescue Rangers reboot, why would Disney make fun of reboots when that’s what’s making them the most money. This next part’s been mentioned by others but I feel like I need to add something else to it. As mentioned earlier there’s a joke where Pumba from the Live Action Lion King shows up and the joke is that all the characters in this scene are voiced by Seth Rogan, but people for some reason think this is a jab at the movie when it isn’t. there making fun of the weird Mo Cap films. And if you need another reason as to why this isn’t making fun of the Live Action films, well about 10 seconds later we see the live action version of Baloo from the Jungle Book and he is treated like a big celebrity. Why would Disney make fun of one of their films whilst making fun of the other it would make no sense.

This movie sucks, it’s not funny and its attempt at being self-aware is laughable but I think what frustrates me the most about this movie, is how much people love it, because it proves that you can make a mediocre movie, but if it’s filled with references and fan service people will just clap. This needs to stop. We had the same thing with Space Jam, that was another terrible film that got people talking because of all the references. This isn’t even the first time Disney have done this as a similar thing happened in Ralph Breaks the Internet where there is a scene that just exists to reference Disney stuff including an extended scene involving the Disney Princesses. Even the MCU is doing this with things like Dr Strange 2, a fairly mediocre movie where the most exciting part about it was a cameo from Mr Fantastic and Professor X. I’m just fed up, I want movies to try again and not be mediocre attempts at trying to be Super Smash Bros.

Chip and Dale Rescue Rangers gets a 3/10 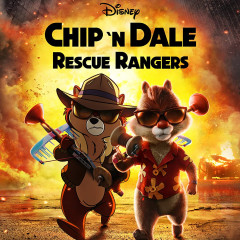 A review of Chip and Dale Rescue Rangers.

THIS REVIEW CONTAINS SPOILERS FOR BOTH CHIP AND DALE RESCUE RANGERS AND DR STRANGE: IN MULTIVERSE OF MADNESS