The trippiest film of 2022 is here starring Michelle Yeoh, and it does not disappoint.

The multiverse is making waves right now. On one hand, you have Doctor Strange in all its Marvel big budget glory – and on the other, you have Everything Everywhere All At Once created with $25 million (a small fraction of Doctor Strange’s budget). To put it simply, the latter takes the multiverse to another level. One that really doesn’t take itself too seriously, is utterly ridiculous in every meaning of the word and uses its smaller budget to unlock creative avenues that seem infinite. You’ll walk out and think you’ve just exited a parallel reality thinking ‘what did I just watch?’.

Everything Everywhere All At Once follows Evelyn (Michelle Yeoh), a down-on-her-luck Chinese-American woman who owns a laundromat that runs like clockwork with her husband Waymond (Ke Huy Quan). Life seems monotonous to Evelyn, and it doesn’t help that her taut relationship with her daughter Joy (Stephanie Hsu) seems to be bubbling over and just about reaching its breaking point. Evelyn is dismissive of her daughter’s sexuality, and she uses Joy’s grandfather Gong Gong (James Hong) as an excuse not to accept her daughter’s gay identity. All hell breaks loose during an appointment with her auditor, the stonefaced Deirdre (Jamie Lee Curtis), and Evelyn is sent on a whirlwind journey by a version of her husband from another parallel reality. Evelyn slowly realises that in all these different versions of herself that could have been, she is the key to stopping an impending doom that threatens reality itself.

Directed by duo Daniel Kwan and Daniel Scheinert, Everything Everywhere All At Once is mindboggling levels of invention. Pulling cinematic references from In The Mood For Love’s moody aesthetic to Ratatouille (yes, you read that right), the filmmaking on display is meticulous and portrays the butterfly effect parallel reality concept in such a fun way. For such a trippy film, comedy is to be expected but Kwan and Scheinert deliver their hard-hitting moments when needed. This is a film about family, priorities and identity. How can we ignore the chaos around us and pay attention to those we love right now?

One particular highlight is how Kwan and Scheinert sift through different versions of Evelyn at breakneck speed, from world-class chef Evelyn to a version of Evelyn that has evolved to have hotdog fingers. In one parallel reality that is essentially our own, Evelyn is shown as a Hong Kong martial arts legend and Hollywood starlet pulling real-life footage from Michelle Yeoh’s own career from red carpet events for Crazy Rich Asians. It’s entirely bonkers, but it just works.

Needless to say, acclaimed actor Evelyn is just as esteemed as Michelle Yeoh (Crazy Rich Asians, Shang Chi, James Bond) herself who delivers a masterclass on acting. Yeoh effortlessly shifts from character to character, and her action sequences pulse electricity into the film. Yeoh is truly a joy to watch on screen, especially when interacting with her co-stars Ke Huy Quan and up-and-coming Stephanie Hsu (Awkwafina is Nora from Queens).

Overall, this film is a feast for the senses but it is particularly striking on the eyes. Shirley Kurata is in charge of the vivacious costuming in Everything Everywhere All At Once, an esteemed costume designer who has worked with Billie Eilish and brands like Rodarte. Kurata’s colourful style adapts to the film’s chaotic plot, enhancing the characterisation of the different versions of Evelyn and highlighting how different parallel realities differ from each other – from the seductive Hollywood glamour movie star universe to the dull reality Evelyn initially lives in.

It’s also visually captivating because of how random some scenes are. There’s an action scene featuring pointed objects that has now engraved a special spot in the collective viewership’s memory. At times, there’s also a massive omniscient doughnut that floats mid-air.

Everything Everywhere All At Once is truly just like its title – overwhelming. That being said, it is absolutely everything and you must watch it at once. 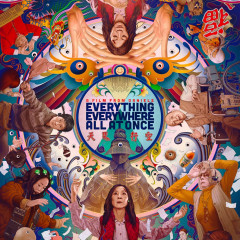 Everything Everywhere All At Once Review: out-of-this-world bonkers

The trippiest film of 2022 is here starring Michelle Yeoh, and it does not disappoint.