'Turning Red’ is a nostalgic heartfelt coming-of-age story with a banging soundtrack.

Most of us have been there, fangirling over a boyband and scheming how to get our parents on our side to go to a silly concert – though none of us has transformed into giant red pandas in doing so.

Pixar’s latest animated film, ‘Turning Red’ follows a Toronto based Chinese-Canadian teen named Mei Lee (Rosalie Chiang) navigating the full chaos of her youth. Partially set in a temple in the middle of Toronto’s bustling Chinatown, Mei finds herself at odds with her controlling mother Ming (Sandra Oh). Mei soon awakens her ability to transform into a big fluffy red panda and learns of her family’s furry history.

Set in 2002, the nostalgia of the film is hinted at through Tamagotchis, stickers on practically everything, and the existence of 4*Town, a boyband who appears as angels fallen from the sky donned in all-white with the noughties pop serotonin sound. 4*Town’s infectious cheesy songs like ‘Nobody Like U’ and ‘U Know What’s Up’ are written by Oscar-winning Billie Eilish and Finneas, with Finneas actually appearing as 4*Town member Jesse alongside Jordan Fisher (Robaire), Josh Levi (Aaron Z.), Grayson Villaneuva (Tae Young), and Topher Ngo (Aaron T.). Fair warning, ‘Nobody Like U’ will remain etched into your brain like every noughties Jonas Brothers tune.

Turning Red is the first animated feature from Oscar-winning director Domee Shi, following her bringing a dumpling to life in her tear-inducing, Oscar-winning short Bao. Domee Shi sensitively pulls together friendship, period talk and generational trauma in Turning Red and it marks a significant shift in direction for Pixar’s films. Disney, on the other hand, has a long way to go – following news that they had censored same-sex affection and adoration in the final cut of Turning Red.

What makes this film so special is the exploration of family – both biological and chosen. Mei is set on a journey to find common ground with her mother, instead of constantly shapeshifting herself to become what her mother would like her to be.

Similar to Encanto, there is no real villain or anyone to blame for it other than generational trauma that haunts how one grows up and impacts how one might raise their own children. For a Pixar movie, it is a heavy subject, to say the least. However, Turning Red pulls light from it, and for a film intended to get the entire family together to watch, it is impactful indeed.

On the other end, there is the celebration of a chosen family of Mei's friends: Miriam (Ava Morse), Priya (Maitreyi Ramakrishnan) and Abby (Hyein Park). Kindred spirits, equally chaotic and all head-over-heels for 4*Town, with each having their own ultimate bias (favourite member). What Turning Red teaches us is that we are never alone, and that friendship is truly something to be treasured, as put in 4*Town’s lyrics in ‘Nobody Like U’: ‘I’ll never not be your ride, or die, alright’.

Turning Red is somewhat of a breakthrough film for Pixar, it openly talks about periods and sanitary products – an absolute first for any animated Pixar film. It is colourful, joyous, and is sure to speak to so many young people today who are facing similar predicaments growing up. It doesn’t seek to solve the tangle of generational trauma so much as to understand and acknowledge it. Plus, we get an adorable giant red panda out of it and a group of enterprising friends who just really stan 4*Town (but don’t we all now?). 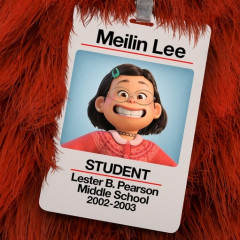 'Turning Red’ is a nostalgic heartfelt coming-of-age story with a banging soundtrack.